Airline group IAG, which also owns Iberia and Vueling, said its largest shareholder, Qatar Airways Group, had undertaken to subscribe for its pro-rata entitlement in the fully underwritten capital increase.

Qatar Airways Group has a 25.1% holding in the airline group.

The funds will be used to reduce debt and help IAG withstand a prolonged downturn in travel, the group said.

It also warned today that the outlook for the rest of the year and 2021 had worsened since the rights issue was announced in July.

IAG expects its September to December capacity to be 60% lower than 2019's level, a cut from its previous estimate of a 46% drop, and said in 2021 capacity is expected to fall by 27%, worse than the 24% previously predicted.

This underlines the scale of the challenge facing Gallego, the Spanish insider who took over from long-time boss Willie Walsh this week.

Under the terms of the fundraising, which was announced in July and approved by shareholders on Tuesday, investors are being offered new shares at a 36% discount and can subscribe to three new shares for every two they own.

IAG said that despite the downgrades it still expected to reach breakeven from operating activities in the last quarter of 2020, and progress was being made with job cuts at BA.

IAG said the 2.97 billion new shares would be at a subscription price of €0.92, a 36% discount to the theoretical ex-rights price based on the closing price yesterday. 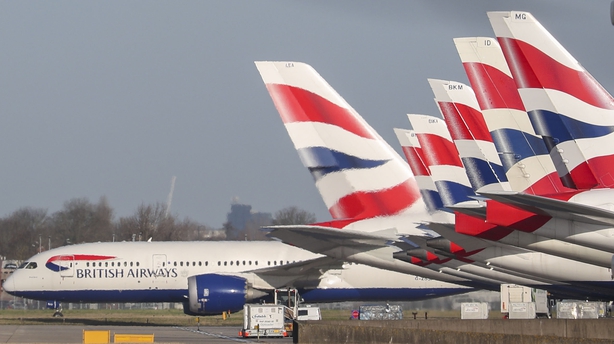 BA, which is aiming to shed 13,000 jobs as a result of the crisis, has already made over 8,000 redundancies, IAG said, adding that the airline has also reached agreement in principle with Unite, which represents cabin crew.

A consultative ballot is expected shortly, which could end a bitter row with the union.

IAG said that it expected to report restructuring charges of €330m in 2020 due to redundancies.