New figures from the Central Statistics Office show that the economy contracted by 6.1% during the second quarter of 2020 due to the impact of the Covid-19 restrictions - the biggest quarterly drop ever recorded.

This means the economy is now in recession after an initial estimate that it expanded in the first quarter was revised downwards.

A recession is defined as a fall in GDP for two quarters in a row.

Today's figures show that Gross Domestic Product (GDP), a measure of the total output of an economy, shrank by 6.1% in the three month period.

When the profits of multinationals were stripped out, as measured by Gross National Product (GNP), the economy contacted by 7.4%, the CSO added.

The CSO said the impact of the Covid-19 restrictions varied across the sectors of the economy in the three month period from April to June.

Industry and government spending were the only sectors which continued to make a positive contribution to economic growth in the three month period.

But sectors focused on the domestic market experienced significantly lower levels of economic activity in the quarter, with construction contracting by 38.3% and the distribution, transport, hotels and restaurants sector contracting by 30.3%.

Activity in the Agriculture, Forestry and Fishing sectors slumped by 60.6% while the Arts and Entertainment sector saw activity sinking 65.5%.

Personal consumption of goods and services, a key measure of domestic economic activity, also decreased by 19.6% in the three month period.

The CSO also said that modified domestic demand, a measure that strips out some of the ways large multinational firms can distort GDP here, decreased by 16.4% in the second quarter. 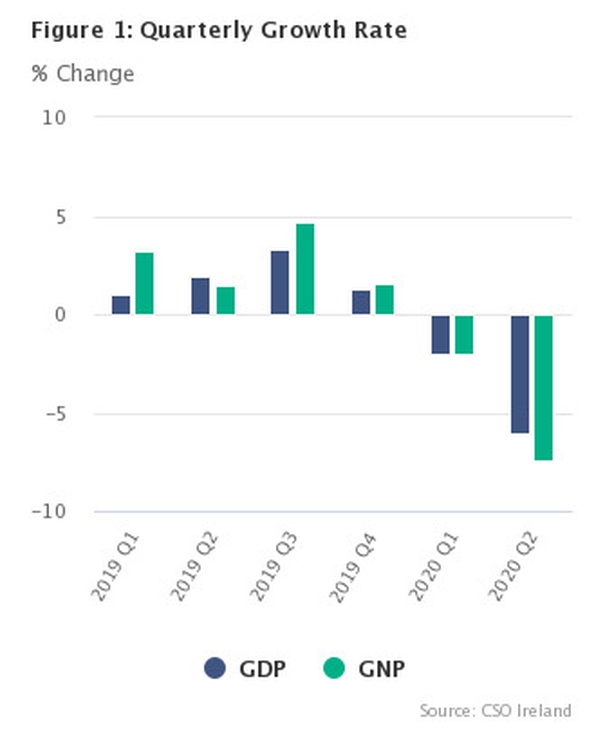 The economy declined by 3% on an annual basis, the CSO added.

Finance Minister Paschal Donohoe said today's CSO figures show the largest quarterly decline in GDP on record, with the second quarter fall of 6.1% surpassing the 4.7% decline recorded in the fourth quarter of 2008.

"However, the hit was not as severe as many of our trading partners, for instance the UK, euro zone and the US where GDP declined by over 20, 12 and 9% respectively in the same period," Mr Donohoe said.

The Minister said that overall the numbers are broadly as expected based on dataflow on the second quarter released over the course of the summer.

"They very much highlight the dual economic impact of the pandemic with net exports positively contributing to GDP in year-on-year terms on the back of robust growth in pharma exports, while the domestic economy suffered a severe hit," Mr Donohoe said.

"Despite the severity of the national lockdown, a large portion of manufacturers continued to trade and this is reflected in our export numbers. However many of our jobs-rich domestic sectors were temporarily closed giving rise to the large contraction in domestic demand seen today," he added.

The Minister for Finance said today's CSO data shows the impact on jobs, income and investment during a quarter when the Covid-19 pandemic was doing the most damage here.

Paschal Donohoe said the effect on the economy had seen the biggest contraction over a 12 week period since records began.

He said the expected impact had been the reason why the Government had introduced measures like the Temporary Wage Subsidy Scheme and the Credit Guarantee Scheme.

The Minister said indicators available to Government show that during the third quarter there was a very strong pick-up, with the economy moving beyond the economic effects seen in the second quarter.

What the Government is doing now, he added, was putting together Budget 2021 and the National Economic Plan that will help the country move through these kinds of challenges.

He made his comments at the launch of the Credit Guarantee Scheme today. 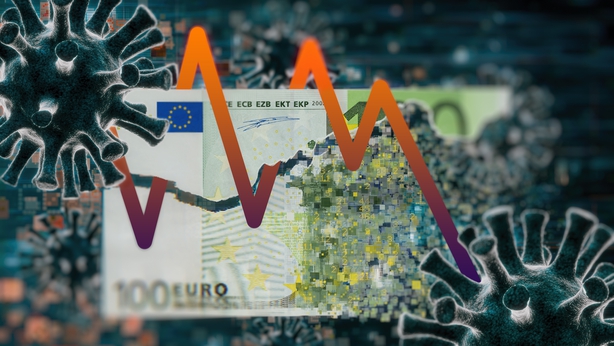 Commenting on today's CSO figures, Neil Gibson, chief economist at EY, said that an economic contraction of 6.1% would normally be cause for alarm, but today's figures are well above the level expected by most forecasters and are being met with a sense of positivity.

"The contraction will be considerably less than others in Europe and will likely keep Ireland atop the headline growth charts, albeit with the most severe quarterly contraction ever recorded," Mr Gibson said.

But he said that, as always with Irish GDP, the headline figure does not tell the full story.

"A major contributing factor to the comparatively modest contraction was a very sharp fall in imports, down over a third in the quarter. This was largely due to falls in Intellectual Property imports as multinationals paid less royalties back to overseas parent companies," Gibson said.

He also said the figures provide the Government with a tricky messaging challenge as the public may well feel that this means they have considerable spending available to support the economy, but this will be only partially true.

"Today's figures, coupled with relatively robust early year tax figures should not be downplayed, but taken in context with other data the severity of the Covid-19 impact is still very clear. Nevertheless, forecasters are likely to be revising up their Irish growth estimates for 2020," the economist added.