Diageo has chosen Ballymore as its partner to deliver the transformation of 12.6 acres of its St James's Gate site in Dublin into one of the most dynamic urban quarters in Europe.

The maker of Guinness said that after "significant" investment since 2011 at St James's Gate and advances in technology, it can now brew more beer with less space.

To this end it wants to transform 12.6 acres of its nearly 50 acre site to create a mixed-use development, whic will include up to 500 residential units as well as office and commercial space.

The companies said that Diageo and Ballymore will work together on a shared vision for the Guinness Quarter that will preserve the heritage assets and create a new urban area that will open up the St James's Gate site.

The Guinness Quarter will also be developed as the first zero carbon district in Dublin, which will involve re-using some of the existing buildings as well as examining all available renewable energy sources and how zero energy ratings can be met.

Ballymore was selected following a "rigorous and thorough" search by Diageo since the scheme was announced in the autumn of 2017.

Extensive engagement activity with the local community and other stakeholders will continue in the time ahead as Diageo and Ballymore develop a masterplan for the Guinness Quarter ahead of a planning application.

The Managing Director of Diageo Ireland, Oliver Loomes, said that St James's Gate is a unique and extraordinary place. 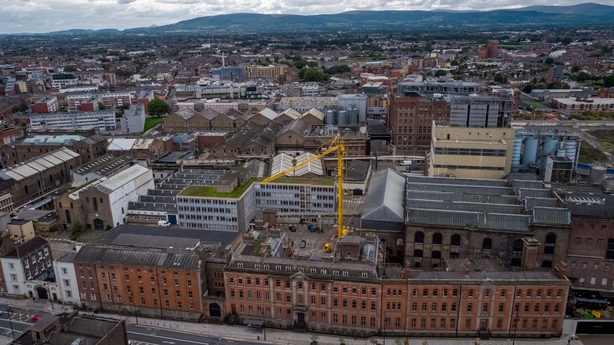 "As we move into the next chapter of this 261-year-old brewery, we are very excited about the possibilities of creating a quarter that will form part of the fabric of the city for generations to come," he said.

"Since our announcement in 2017 we have been committed to doing it right and know that Ballymore share our vision for the future of the site," he added

Mr Loomes also said the company's ambition is to work with the Iveagh Trust, one of Dublin's largest social housing providers, as a partner in the project.

The chairman and chief executive of Ballymore, Sean Mulryan said the company was honoured to have been chosen as Diageo's development partner for the Guinness Quarter.

"With 40 years of experience in delivering complex urban regeneration sites, in city centre locations across Europe, we are confident we have the team to deliver," he added.