Sinn Féin's finance spokesperson Pearse Doherty has raised concerns about the eligibility of low-paid or part-time workers for the new Employment Wage Subsidy Scheme, and described the Government's advice as "confusing".

Under the scheme, employees with gross weekly pay of less than €151.50 are not eligible for a wage subsidy.

Mr Doherty said that, according to Department of Finance briefings last month in relation to the July Stimulus, 153,000 workers across the economy receive less than €151.50 per week, which would see them locked out of the EWSS. 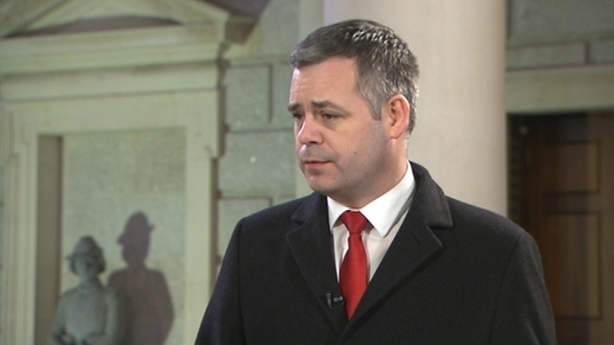 Around 61,100 employees on earnings below €151.50 had employers availing of the current Temporary Wage Subsidy Scheme.

Mr Doherty noted that today, Minister for Finance Paschal Donohoe had said that setting a threshold of €151.50 for subsidies to be secured would incentivise employers to increase the pay or hours of workers so that they could avail of the scheme.

However, Mr Doherty cites legislation underpinning the EWSS as well as guidelines from the Revenue Commissioners published on 14 August which state: "Safeguards will be implemented to minimise… manipulation of payroll including deferring, suspending, accruing, increasing or decreasing gross wage that would normally be payable."

The legislation provides that if an authorised officer determines that an employer has resorted to any "contrivance" by way of deferring, suspending increasing or decreasing the gross pay that would otherwise have normally been paid to the qualifying employee with a view to securing a wage subsidy payment from the Revenue Commissioners, then the employer will have to refund the subsidy in relation to those employees.

Mr Doherty said the Minister appeared to be encouraging employers to do just that, as a result of no subsidy being payable for those low-paid/part-time employees.

Meanwhile, Mr Donohoe has defended the requirement for employers availing of the new EWSS to have a Tax Clearance Certificate as "entirely reasonable".

Mr Donohoe described the scheme as the most significant intervention the Government has put in place to support employers and employees in the difficult times caused by the Covid-19 virus.

He said the EWSS will be a "broader, simpler scheme", which would be "economy-wide", and open to more employees including seasonal workers and new hires.

Asked about the EWSS requirement for a Tax Clearance Certificate, he said it was entirely reasonable when putting in place a programme requiring spending of nearly €2.3 billion of taxpayers' money to ensure that employers were fully tax compliant.

Finance Minister Paschal Donohoe says the economy is now reopening, but it is happening at a lower rate. He said it is reasonable to ask companies for tax clearance certificates in order to avail of the new EWSS. | Read more: https://t.co/JXhsmA4JmQ pic.twitter.com/bLeiwn98o8

Responding to questions about concerns about employers' cash flow arising from a slower turnaround for subsidy payment of up to six weeks in arrears, the Minister said the Government was looking at this.

He said the Government had asked officials and the Revenue Commissioners to look at options on how they might be able to deal with it.

He noted that under the TWSS, workers qualified for a certain percentage of their wage calculated at a particular point in time - but said the EWSS would provide two simpler subsidy rates of €151.50 or €203.

Asked whether the €151.50 threshold for subsidies would dissuade employers from hiring people earning below that level, Paschal Donohoe forecast that it would be more likely to encourage employers to give lower-paid part-time workers more hours so the company could reach the threshold to access the wage subsidy.

He said that a decision to extend wage subsidies would normally be a decision for Budget Day, but that waiting until then could make the situation even more difficult for people than they are at present, and leave them facing further uncertainty.

Asked about the fact that the EWSS rate of rebate is lower than under the TWSS, Mr Donohoe said that the average rate for employees receiving the TWSS at the moment is €280-290, while the average for new employees coming onto the scheme is approximately €230.

The Minister noted that TWSS subsidy rates had been brought in when the economy was almost fully closed down.

He said that now that the economy was reopening, with more commercial activity than when the TWSS was launched, it was appropriate to adjust the rate of the subsidy "slightly".

He stressed the the subsidies were being extended to March 31, which was longer than had been anticipated.

Unlike the TWSS, which can leave recipients with a tax bill to be collected next year, tax due under the EWSS will be collected in real time, the Minister also said.

Mr Donohoe said said that rarely had a budget been prepared in a period of such uncertainty, so it was important to have a good budget for 2021.

He noted that normally the September Exchequer figures would have a huge impact on the budget, but acknowledged that monthly tax collection had been moving "in ways that are at times uncertain."

Asked whether the "one size fits all" approach to the EWSS was appropriate, he said that it would be difficult to differentiate between different firms or sectors, including depending on where they were based in the country.

He said the business Restart Grant offered a better model, making higher levels of support available for areas like Laois, Offaly and Kildare who had suffered the reintroduction of restrictions.

He also confirmed that the Government is still considering whether to extend the suspension of the right of employees to demand redundancy after being laid off without work for a certain period.

Speaking earlier on Morning Ireland, Mr Donohoe said he expects employers who move into the new scheme will be in it for at least the next six months.

"If we do find ourselves in a situation where employers are opting out because of improved business performance, I think this will be really positive and we will have to deal with it on a case by case basis," he explained.

Mr Donohoe said the access criteria for the scheme is that companies' expected orders across a six month period have to be significantly lower - 30% - than they were the same six months a year ago.

"Therefore it is nearly certain if any employers moves into the scheme they will be in it for the full six month period," he explained.

Many people have come off the PUP over the summer, but Finance Minister Paschal Donohoe says they are expecting that fall-off to happen more slowly over the next months. | Read more: https://t.co/JXhsmA4JmQ pic.twitter.com/aOQ3b9LRol

Meanwhile, the chief executive of ISME, Neil McDonnell, has said accelerated job losses are inevitable in "restricted sectors" such as the hospitality sector.

Neil McDonnell said where employers will not be able to top-up the existing wage subsidy scheme and can pay people a maximum of €203, "retention of these people becomes marginal for the employer and the employee".

He said the moratorium on redundancies in current emergency legislation ceases to have effect from 17 September.

"You could see employees seeking to be made redundant if their hours are significantly reduced," he said. "I think accelerated job losses are inevitable in the more restricted sectors," he added.

In relation to the State footing the bill for schemes such as the wage subsidy scheme, Mr McDonnell said it is important to contextualise the supports currently given to employers to maintain people on the payroll.

"For every person that loses a job and goes on to jobseekers, there is an immediate charge to the State of €10,556 per annum. That excludes the losses that the State incurs in lost taxes and social contribution, so you could be looking at a net loss to the State of over €20,000 for every employee than leaves full-time or part-time employment," he explained.

Mr McDonnell said sectors such as pharma, hygiene and any that are able to sell online are performing well in light of Covid-19.

But he warned that a large portion of Ireland's domestic economy relies on service based industries, in which some employers are not going to be able to top-up the €203 paid by the state.