The move came about after exchange operator Deutsche Boerse tweaked its rules in order to quickly expel insolvent companies.

Delivery Hero is worth around €20 billion, about three times its value when it debuted on the German stock market in June 2017.

Delivery Hero is a somewhat surprising entry into the elite index because, despite trading in more than 40 countries, it has no sales in Germany - unprecedented for a DAX company - even though it was founded in Berlin in 2011.

"Entering the DAX is an acknowledgement that the capital market believes in our platform", said chief executive, Niklas Ostberg.

The company's first day of trading on the DAX 30 will be August 24.

Delivery Hero originally specialised as an online intermediary between customers and restaurants. It later set up its own delivery fleets, expanding its services to include groceries, pharmaceuticals and even flowers.

Questions remain over the viability of its business model as the company has never made an operating profit.

It has also attracted criticism as a face of the "gig economy" in that it classifies many of those that work for it, such as delivery drivers, as independent contractors and not employees.

It also must survive in a crowded field that includes Deliveroo and Uber Eats. 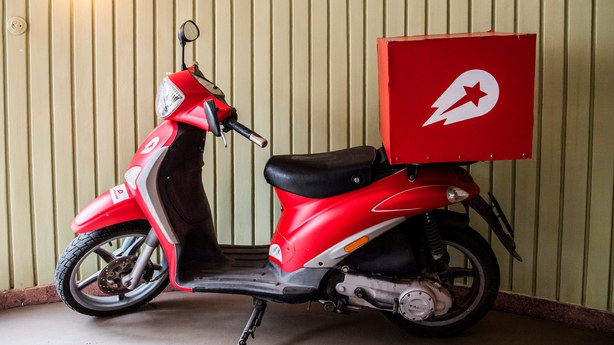 Delivery Hero has acquired a number of operations in other countries, most recently South Korean competitor Woowa in 2019 for $4 billion, and plans to launch in Japan under the Foodpanda brand in the third quarter.

It lost its German operations when it sold Foodora, Lieferheld and Pizza.de to Dutch rival Takeaway in 2018 for close to €1 billion.

The company has raised its full-year revenue expectations for this year to $2.6-2.8 billion.

In the second quarter of 2020, at the height of the coronavirus lockdowns, Delivery Hero reported an order growth of 95% year-on-year and delivered 100 million orders in one month.

At the current pace, it will deliver one billion orders in 2020, it said.

As the risk of a second Covid-19 wave and further lockdowns increases, Delivery Hero could become even more attractive to investors and hungry customers.

German payments firm Wirecard suffered a spectacular fall from grace after it was forced to admit to a €1.9 billion hole in its accounts.

Its share price has fallen 99% in the year to date and its former chief executive has been arrested on fraud charges.