The minimum download speed for its standard products will increase from 150Mb to 500 Megabits per second.

National Broadband Ireland said both business and residential users can also avail of 1 Gigabit per second (Gbps) product via internet service providers once the network is live.

The network build is commencing this month. Once completed, the new network will connect 1.1 million people.

When NBI signed contracts with the Government in November last year, the original commitment was  to provide 150Mbps to every person and business in the Intervention Area without access to high-speed broadband.

NBI will connect around 537,000 premises where commercial operators do not currently provide high-speed broadband. It says it will make the new Fibre-to-the-Home technology available to all retail service providers operating in the Intervention Area.

With businesses able to access packages in excess of 1Gbps when the network has its first connections later this year, the National Broadband Plan is expected to play a key role in rejuvenating the potential for enterprise and employment in rural Ireland. 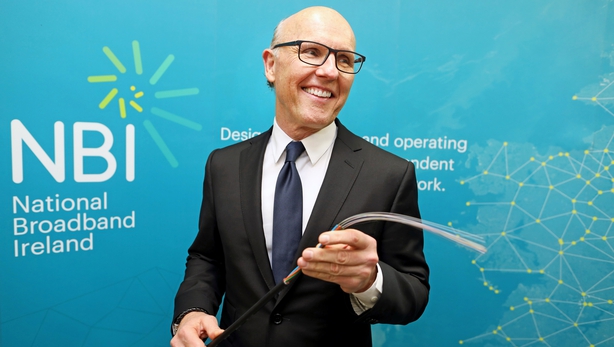 NBI Executive Chairman, David McCourt, said, "Since the global Covid-19 pandemic struck in Ireland over six months ago, many people's lives have changed significantly and we are much more reliant on digital connectivity than ever before. Today's announcement to increase our minimum speeds empowers every person, every school, every farm and every business in the Intervention Area to gain access to truly world-leading speeds and we are incredibly proud to be playing our part in bringing this to rural Ireland."

In the six months to-date since work commenced, NBI has mobilised its team to work across 17 counties nationwide with survey work completed for over 63,000 premises.

Build work for the new fibre network is due to commence in parts of Cork and Cavan by the end of this month, and shortly after that, in townlands in Galway. As a project of tremendous size and scale, the Intervention Area spans 96% of Ireland's land mass and NBI will eventually use enough fibre to go round the world nearly four times as it delivers state-of-the-art Fibre-to-the-Home connections.

NBI Chief Executive Officer Peter Hendrick said that the huge increase in minimum download speeds that will now be delivered under the NBP is fantastic news for those living in the Intervention Area.

"At NBI we realise the vital importance of building a network that not only caters for today's demands, but future-proofs for generations to come," Mr Hendrick said. "Our promise is to continue to build a limitless Ireland with reliable, future-proofed superfast broadband."

NBI is encouraging people to check their eligibility and register for updates at www.nbi.ie.