The volume of retail sales rebounded by 38.4% in June compared to May, according to the latest figures from the Central Statistics Office.

This marked the largest monthly increase on record.

The volume of retail sales was 3.5% higher in June compared to a year ago - the first annual increase since the coronavirus lockdown of the economy.

The overall value of retail sales last month was the same as June of last year.

The rebound last month reflects the reopening of shops on June 8.

However, the CSO noted that the recovery was unevenly spread.

Fuel sales are down 18%, while clothing, footwear and textiles are 16% lower.

But sales of food are up 19%, while electrical goods are up 14%. Sales of hardware, paint and glass are also up 30% compared to June of last year.

Online sales as a percentage of overall retail sales fell in June to 6.8% compared to 13.2% in May, the CSO said.

"Given the declines in April and May, a 3.5% increase in sales volumes is actually not a whole lot. With the amount of savings built up, one would have thought the spending growth could have been more than that," Goodbody Stockbrokers chief economist Dermot O'Leary said. 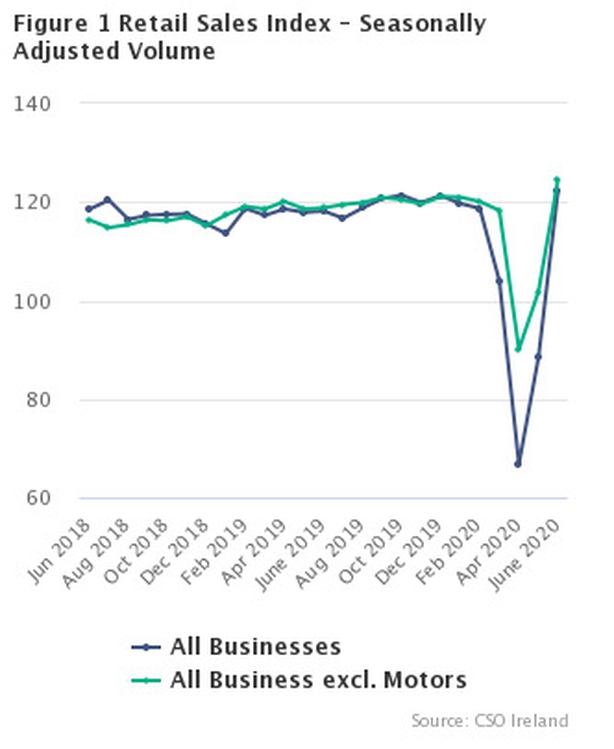 "There is some pent-up demand there but it still indicates some level of caution towards using those savings and an element of consumers not being able to spend in certain retail outlets, the most prominent being bars," the economist added.

Retail sales in June were 3.1% higher than February, before the crisis began, but were still down 21.8% year-on-year for the second quarter as a whole, reflecting the collapse in April and May.

Ireland's economy was the fastest growing in Europe for most of the last five years before the pandemic struck.