Gold soared to a record high today as investors rushed into the safe-haven commodity on concerns about heightened China-US tensions, spiking virus infections and a lack of progress on a new stimulus bill in Washington.

Dollar weakness was a big factor behind gold's takeoff, analysts said, after vast monetary easing by the US Federal Reserve undermined confidence in the greenback without reassuring investors about the outlook for any fast US recovery.

"A further escalation of tensions between China and the US, with the tit-for-tat embassy closure, was the most obvious reason for the change in market tone," said Rupert Thompson, chief investment officer at Kingswood.

"But the continuing uncertainties over the prospects for the economic recovery may also have contributed," he said.

It later pulled back somewhat. 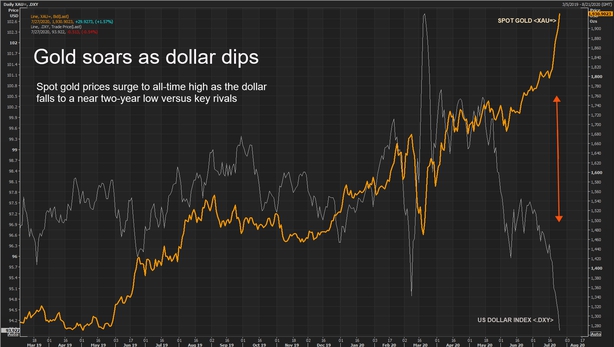 Relations between the world's two superpowers took another negative turn when a US mission in Chengdu was ordered to shut in retaliation for the forced shutdown of the Chinese consulate in Houston, Texas.

Eyes are on the Fed's policy meeting this week, with some predicting further measures to boost the economy,  possibly even the use of negative interest rates, that could put more pressure on the dollar and send gold above $2,000.

There are also concerns that a worse-than-forecast reading on second-quarter US gross domestic product could spark another dollar sell-off.

The euro hit its highest dollar value since September 2018.

As gold rose, stock markets - a riskier investment - wobbled, with investors fretting over the impact of the virus on the economy.

After months of strong gains across equity markets - fuelled by trillions of dollars in government and central bank support - traders had already begun to step back, weighing the long-term economic impact of the coronavirus.

In Europe, only Frankfurt held steady at the close after a key survey showed that German business confidence rose for the third month in a row in July. London and Paris both ended lower.

On Wall Street, the Dow reversed slight opening weakness to trade a touch firmer in the late New York morning.