Shares in the airline are down 3.8% after it said it was impossible to say whether it might turn an annual profit due to the impact of the Covid-19 pandemic.

The airline posted an after-tax loss of €185m for the three months to 30 June, its first-ever loss in the quarter, but less than the €232m forecast in a company poll of analysts.

"Given the current uncertainty, Ryanair cannot provide any FY21 profit after tax guidance at this time," group chief executive Michael O'Leary said, referring to its financial year which ends on March 31, 2021.

"A second wave of Covid-19 cases across Europe in late autumn (when the annual flu season commences) is our biggest fear right now," he added.

The carrier said the quarter, in which passenger numbers were down by around 99%, was "the most challenging in Ryanair's 35-year history".

At the end of the quarter, Ryanair moved from a skeleton service to flying around 40% of its usual schedule.

It hopes to fly 60% of its normal schedule in August and 70% in September and expects to post a smaller loss in the current quarter.

The airline's planes should be around 70% full in July and August, Mr O'Leary said in a pre-recorded video presentation.

That is worse than Hungarian budget rival Wizz, down just 11%, but far better than most other European carriers, including EasyJet, which have slumped by 59%.

Ryanair also said today in its results statement that it expects that over 90% of customer cash refund requests will be cleared by the end of July.

The airline also warned that the challenge of Brexit, and in particular a no-deal Brexit, remains high.

It said it hoped that before the end of the transition period in December the UK and Europe will agree a trade deal for air travel which will allow the free movement of people and the deregulated airline market between the UK and Ireland to continue.

"As an EU airline, the Ryanair Group should be less effected by a no-deal Brexit than UK registered airlines. We still, however, expect adverse trading consequences to arise," it added.

Ryanair is not planning to reduce capacity flying to Spain after the British government's "regrettable" decision to advise against all non-essential travel to the country's mainland due to Covid-19, its chief financial officer Neil Sorahan said today. 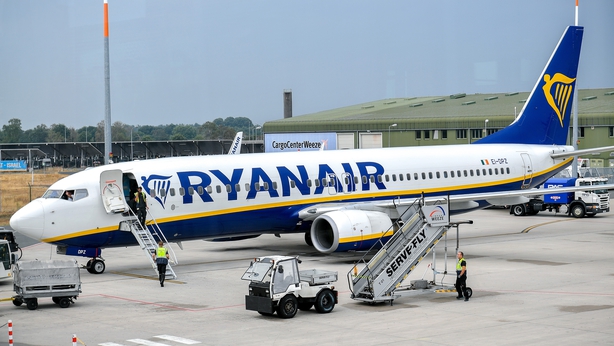 The UK on Saturday abruptly imposed a two-week quarantine on all travellers arriving from Spain after a surge of coronavirus cases, a dramatic and sudden reversal to the opening of the European continent to tourism after months of lockdown.

"I think it is regrettable, very disappointing," Sorahan told Reuters in an interview following the publication of quarterly financial results.

"I have no doubt that we will see other localised outbreaks and we need to be flexible enough to deal with them as they arise over the next number of weeks and months," he added.

Asked if Ryanair would reduce capacity between the two countries, Sorahan said "we have no plans to cut capacity in the medium term."

The Spanish government had made clear that the country remained open for tourists, with infection levels low in much of the country, Sorahan said.