The country's unemployment rate, including those receiving temporary Covid-19 jobless benefit, fell to 22.5% at the end of June from 26.1% a month earlier, new figures from the Central Statistics Office show.

The unemployment rate, which stood at just 4.8% before the Covid-19 crisis, hit a record 28.2% in April after 600,000 people claimed the emergency payment.

That fell to 439,000 this week as most retailers and shopping centres resumed trading earlier this month.

Restaurants, hotels, hairdressers and some pubs reopened for the first time since March yesterday to almost fully exit lockdown.

"The Covid-19 crisis has continued to have a significant impact on the labour market in Ireland in June 2020," the CSO said.

"While the standard measure of Monthly Unemployment was 5.3% in June, a new Covid-19 Adjusted Measure of Unemployment could indicate a rate as high as 22.5% if all claimants of the Pandemic Unemployment Payment were classified as unemployed," it added. 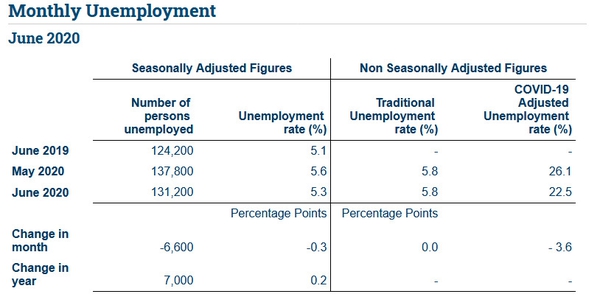 Excluding the Covid-19 payments, which are higher than regular jobless benefits and due to be phased out in August, the unemployment rate actually fell to 5.3% from 5.6% in May, the CSO added.

"Temporary measures such as the Pandemic Unemployment Payment and Wage Subsidy Scheme have proven to be an effective stop gap. However, these were only ever intended as temporary measures, and with these supports slated to be phased out in the coming months the next phase of recovery will provide a real challenge," Jack Kennedy said.

He said the Government's new jobs recovery initiative will have to pay specific attention to areas such as rural and youth unemployment, given the reliance of these groups on industries hardest hit, namely tourism and hospitality.

"The latest figures continue to show the disproportionate impact of the crisis on young people, with the Covid-19 adjusted unemployment rate for 15-24 year olds at 45.4%. For the foreseeable future the labour market will remain intrinsically linked to public health, which will require a new approach to job creation that takes this into consideration," he added.