The number of new mortgage approvals in May was nearly 62% lower than the same month last year.

According to the Banking and Payments Federation Ireland, the decrease was not unexpected given the scale of the lockdown and physical restrictions due to Covid-19.

In total 1,879 new mortgages were approved by lenders here in May - a decrease of 14.6% compared to a month earlier.

But compared to May of last year the volume was nearly 62% lower.

At €442 million the overall value of the mortgages approved dropped nearly 16% between April and May, and 61% compared to May of 2019.

On the face of it, the figures may look alarming and point to either a major pull back by mortgage issuers or a dramatic drop in demand.

But the Banking and Payments Federation Ireland said it was expected given the scale of the lockdown and physical restrictions, and their impact on employment figures and economic uncertainty.

The organisation said it was also significant that despite the majority of the country being shut down and the economy experiencing an unprecedented shock, 1,900 mortgages worth €442m were approved.

It said it shows that demand within the housing market may be more resilient than expected and also demonstrates that banks are meeting that demand.

"Our strong message to would-be borrowers, whose income and employment circumstances have not been impacted by the current pandemic and who meet normal lending criteria, is to actively proceed with their applications," Brian Hayes, chief executive of BPFI, said. 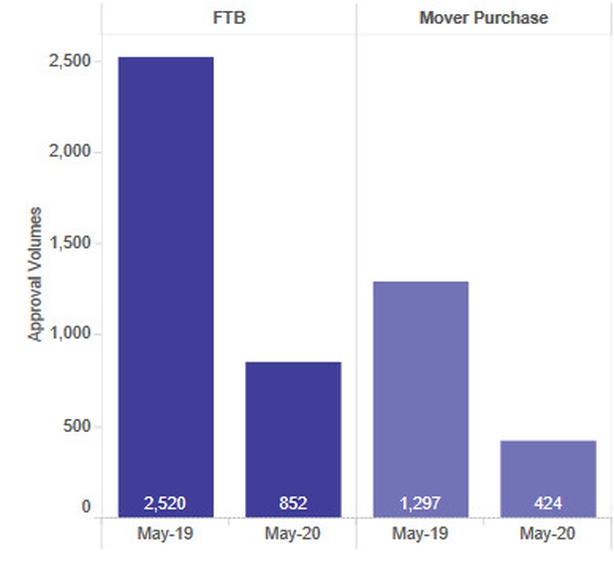