The International Monetary Fund has further lowered its forecasts for global economic growth this year.

In its World Economic Outlook published today, the IMF said economies around the world have been more negatively impacted in the first half of the year than it had anticipated and recovery has been more gradual than previously forecast.

The IMF has lowered forecasts for global growth this year by an additional 1.9%, compared to its forecast in April, and it now expects global GDP to shrink by 4.9% in 2020.

Next year, it said it expects activity to recover by 5.4%.

But this would still leave the level of global GDP next year 6.5% lower than it had been forecast to be back in January of this year.

The IMF also warned today that the impact of Covid-19 on low income households will be "particularly acute."

Using data from the International Labour Organisation, it said the reduction in global work hours from the fourth quarter of 2019 to the first quarter of 2020, is equivalent to the loss of 130 million full time jobs.

It forecasts that the second quarter of this year could see the equivalent loss of 300 million full time jobs. 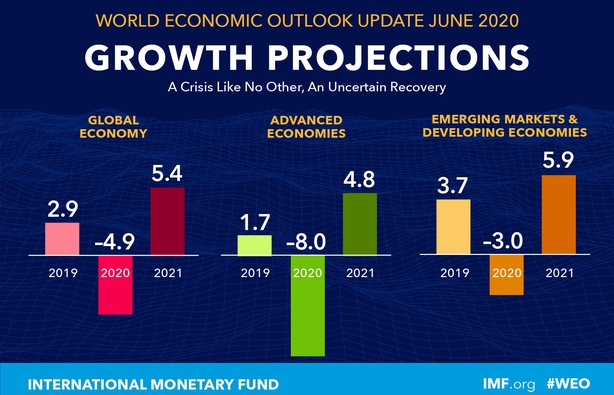 The IMF said it believes that around 80% of the estimated 2 billion casually employed people around the world will have been affected.

The impact will be most severe on low skilled and low income households who do not have the option of working from home, it added.

In countries where recovery has begun, the IMF still expects a negative economic impact with continued social distancing and lower productivity from new health and safety practices in workplaces.

The IMF said the coronavirus pandemic is taking a severe toll on Europe, with the euro area economy set to plunge by 10.2% this year.

The updated World Economic Outlook was dramatically worse than the April forecasts, and shows that even Germany will contract by 7.8% while other countries fare much worse.

Britain also is likely to see a double-digit decline, with its economy contracting by 10.2%, the IMF said.

Today's outlook from the IMF also predicts that the US economy will contract 8% in 2020, but China will eke out 1% growth.

The IMF also said that key emerging market economies are taking a severe hit to GDP amid the coronavirus pandemic, with India seeing the first contraction in decades.

Its updated World Economic Outlook shows India's GDP will fall 4.5% this year, far worse than expected in April just after the pandemic first took hold outside of China.

Mexico will see a double digit decline of 10.5% while Brazil just misses that mark with a drop of 9.1%.

Argentina is projected to fall 9.9%, with the country already in the middle of a massive debt crunch on top of the health and economic crises after once again defaulting on its foreign obligations.

During the global financial crisis in 2009, these emerging markets, along with China, were booming, supporting the global economy even as advanced nations faced severe recessions.