Global trade is expected to drop around 18.5% year-on-year in the second quarter of this year in a huge coronavirus-driven plunge which nonetheless could have been much worse, the World Trade Organization said today.

The WTO said that in the first quarter, the volume of merchandise trade shrank by 3% compared to the same three months in 2019.

"Initial estimates for the second quarter, when the virus and associated lockdown measures affected a large share of the global population, indicate a year-on-year drop of around 18.5%," the global trade body said.

However, it said the expected plunge was better than the WTO's worst-case scenario for the Covid-19 pandemic's impact on global trade - and that the world economy may have bottomed out in the second quarter of the year.

"The fall in trade we are now seeing is historically large - in fact, it would be the steepest on record. But there is an important silver lining here: it could have been much worse," said outgoing WTO director-general Roberto Azevedo.

"This is genuinely positive news but we cannot afford to be complacent,"  he added.

In its annual trade forecast issued in April, the WTO forecast that volumes would contract by between 13% at best and 32% at worst in 2020.

"As things currently stand, trade would only need to grow by 2.5% per quarter for the remainder of the year to meet the optimistic projection," it said.

"However, looking ahead to 2021, adverse developments, including a second wave of Covid-19 outbreaks, weaker than expected economic growth, or widespread recourse to trade restrictions, could see trade expansion fall short of earlier projections," the trade organisation said.

The WTO said the outlook for the global economy over the next two years remained "highly uncertain". 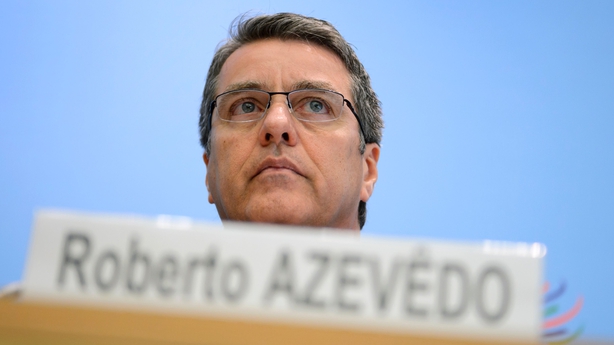 Roberto Azevedo said policy decisions had softened the ongoing blow and would help determine the pace of economic recovery from the crisis.

"For output and trade to rebound strongly in 2021, fiscal, monetary, and trade policies will all need to keep pulling in the same direction," said the Brazilian career diplomat, who is leaving his post a year early at the end of August.

Looking at the pandemic and its impact on trade, the WTO said that measures to suppress the spread of the virus, such as physical distancing and restrictions on travel and transport that were in full effect in March, April and May were now increasingly being relaxed.

"These developments are reflected in a variety of economic indicators which, taken together, suggest trade may have possibly bottomed out in the second quarter of 2020," it said.

It said commercial flights, which carry much international air cargo, were down by 74% between January 5 and April 18, but had since risen by 58% to to the middle of June.

Container port throughput also appeared to have staged a partial recovery in June compared to May, it said.

The 164-member WTO said fiscal and monetary policies had arguably been rolled out more quickly and on a larger scale during the pandemic than they were in the global financial crisis of 2008-2009.

It said much of the decline in output had been concentrated in non-tradeable services such as hospitality and entertainment, which were less import-intensive than manufacturing.

Increased purchases of consumer durables could be seen as a bellwether, signalling renewed consumer confidence as lockdowns ease, the WTO said.