The Central Bank has warned that the scale of the economic shock due to Covid-19 is "unprecedented" and will create pressure on the financial position of both borrowers and banks.

Central Bank Governor Gabriel Makhlouf said governments are facing "fantastic levels of uncertainty" over the future and warned that while the financial system is resilient, that resilience is not infinite.

He was speaking after the publication of the Central Bank's Financial Stability Review today. 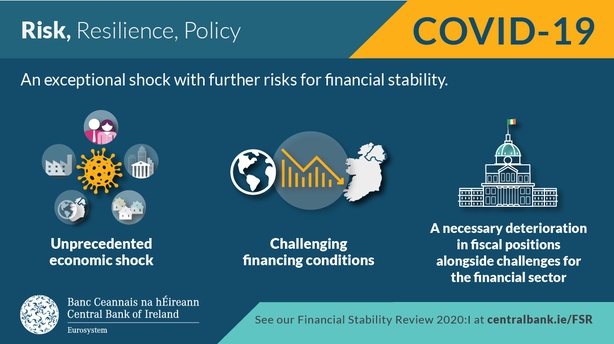 In its Financial Stability Review, the Central Bank estimated that 80% of businesses covering almost 70% of all employment are affected either directly or indirectly by the containment measures through loss of sales, disruption in supply chains and physical distancing.

The Central Bank pointed out that half of small and medium sized businesses hold less than 5% of their annual sales in cash reserves.

Even when it comes to big companies, the Central Bank estimates that half of firms hold less than 8% of annual turnover in cash.

It warned the longer containment measures last, the greater the risk more companies will become insolvent.

It also warned that relying too much on debt might hamper a company's ability to survive by using debt to finance "pandemic-related losses".

The Central Bank said that while multinationals based here have been more resilient, they are not immune from developments in the global economy. 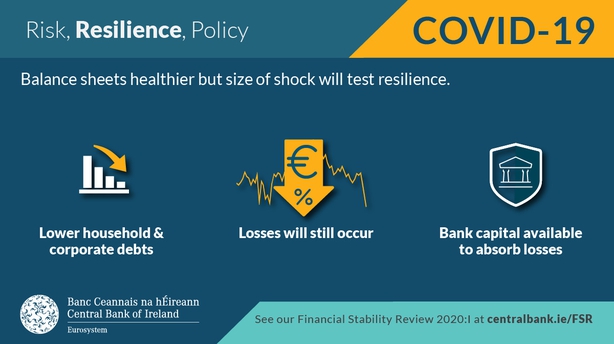 Describing global financial market conditions as "fragile", the Central Bank noted that Irish banks are in a much better position now than they were during the financial crisis.

The same goes for households. Tighter lending rules have lowered levels of indebtedness and exposure to falls in house prices, the bank said.

Today's report also included the results of a survey of property market professionals carried out in April.

It predicted a 5% fall in house prices this year and an expectation that national house prices will be just 2% higher in March 2023 than they were at the end of March this year. 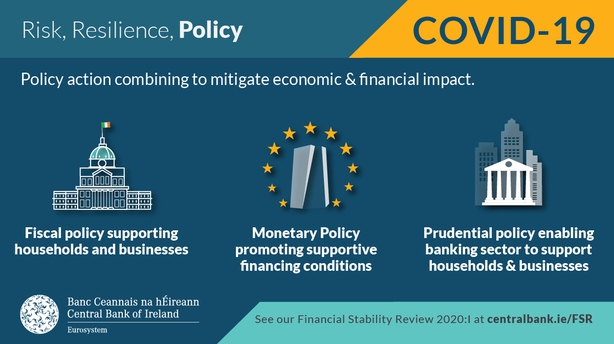 As of 29 May, a total of 74,900 mortgage payment breaks were in place across the banking sector representing 11% of the mortgage market.

The Central Bank warns that some of the payment breaks "may ultimately require further restructuring or resolution".

It also warned that banks will face further pressure because less money is being borrowed and interest rates are lower, squeezing their profit margins.

Numbers on PUP drop 56% since peak