Seasonally adjusted exports decreased by 32% to €11.613 billion in April from March, according to preliminary figures from the Central Statistics Office, as Covid-19 shutdowns hit the trade sector.

This marked the biggest one month contraction on record.

The CSO said that seasonally adjusted goods imports decreased by 11% to €5.834 billion.

This resulted in a decrease of 45% in the seasonally adjusted trade surplus to €5.779 billion in April compared with the previous month.

Today's CSO figures show that the value of exports for April fell by 10% compared to the same time last year.

Exports of organic chemicals decreased by 14% to €1.66 billion in April compared with the same time last year, while exports of professional, scientific and controlling apparatus decreased by 22% to €446m.

But exports of medical and pharmaceutical products increased by 6% to €4.872 billion - accounting for 42% of total exports.

Eexports of electrical machinery, apparatus and appliances also increased by 33% to €738m over the same time last year.

The CSO said that imports of other transport equipment, including aircraft slumped by 76% to €432m in April of this year compared to the same month last year, amid the Covid-19 outbreak.

Imports of petroleum sank by 54% to €211m, while imports of professional, scientific and controlling apparatus increased by 51% to €247m. 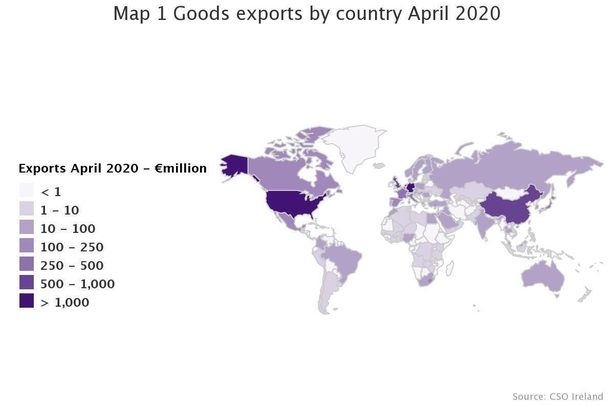 Today's CSO figures also revealed that the EU accounted for 36% of total goods exports in April of which €1.310 billion went to Belgium and €1.092 billion went to Germany.

Total EU exports in April decreased by 3% compared with April 2019.

The US was the main non-EU destination accounting for 33% of total exports in April.

Meanwhile, the EU accounted for 33% of total goods imports in April, which the CSO said was a decrease of 29% on the same time last year.

The US with 14%, China with 7% and Switzerland with 3% were the other main non-EU sources of imports.