Mothercare Ireland is to close its 14 branches after it was placed into liquidation due to the financial impact of the Covid-19 pandemic.

Mothercare Ireland MD Jonathan Ward said the impact of Covid-19 on the business has been unprecedented.

He said it became clear that sales are going to continue to be seriously impacted in the short term while social distancing measures are in place and in the longer term as consumer habits change.

In a statement, Mr Ward said the company had already experienced issues with its supply chain this year and "when we factor the Covid-19 impact on top of this we are forecasting substantial losses this year alone".

"Unfortunately our business is no longer sustainable as it will continue to make losses into the future," he added.

It is understood that the company had barely made a profit in recent years and had been expecting its sales to drop by up to 40% this year as a result of the Covid-19 crisis.

The firm had invested recently in its website and warehouse operations, but despite this was badly hit when its stores were forced to close in March.

Family owned Mothercare Ireland was started in 1998 by David Ward, after he secured the franchise for this country.

Mr Ward retired last year, handing over the CEO reins to his son Jonathan, who runs the company alongside sister Laura who acts as marketing director and Ben who is commercial director.

It is understood that there are very few customer vouchers and deposits outstanding, and it will be up to the liquidator to decide whether they are refunded or honoured in some way.

Last November a decision was taken to close all 79 Mothercare stores in the UK, after the company there entered administration.

The liquidation followed the closure by British department store group Debenhams of its 11 Irish stores in April, costing between 1,200 and 2,000 jobs. 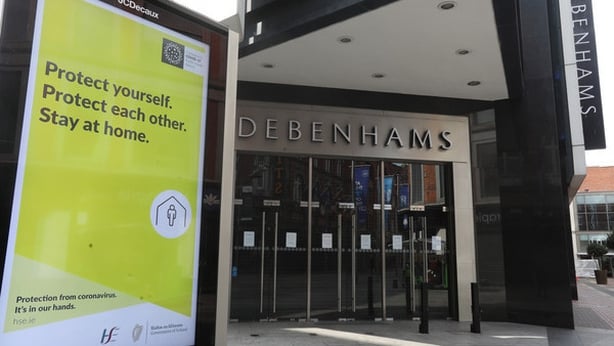 The coronavirus-related disruption has already left 26% of the country's labour force either temporarily or permanently out of work compared with an unemployment rate of 4.8% in February, when almost anyone who wanted a job could get one.

Non-essential retailers allowed open their doors again this week and shopping centres are due to resume trading next week.

Retail Ireland said the retail sector is thrilled to be opening up again, but major challenges remain.

"Many businesses will struggle to survive the crisis, and some have already been forced to close," said Arnold Dillon, Director of Retail Ireland.

"While many landlords are working with tenants to find workable solutions to liabilities that accrued during the lockdown, others are showing no flexibility. A government scheme to incentivise the resolution of rent disputes is required."