New figures from the Central Bank show that the total value of card transactions (including ATM transactions) decreased by 35% in April - the biggest annual decline recorded since the series began.

Today's figures are the Central Bank's first statistics to capture a full month of data where the Covid-19 emergency containment measures were in effect here.

The figures show that spending on groceries and perishables in April increased by 20% compared with the same time last year.

But on a monthly basis, spending on groceries declined by 7%, reflecting the stockpiling by consumers in March.

Expenditure on transport and accommodation slumped by 87% and 91% respectively in April  - the largest contractions ever recorded for these sub-sectors - amid the lockdown.

Meanwhile, spending on social sectors such as restaurants and dining and entertainment declined by 71% and 50%, the Central Bank said.

It also noted that e-commerce spending declined by 4% in April compared to April of last year, but it accounted for nearly half of all retail card spending.

The Central Bank said that retail card spending (point of sale and credit cards) was relatively stable through the first two weeks of May, after picking up from its low point in mid-April.

Its latest daily card payments data, up to 22 May, shows that most recent increase in retail card spending coincided with the first phase of restrictions being eased. 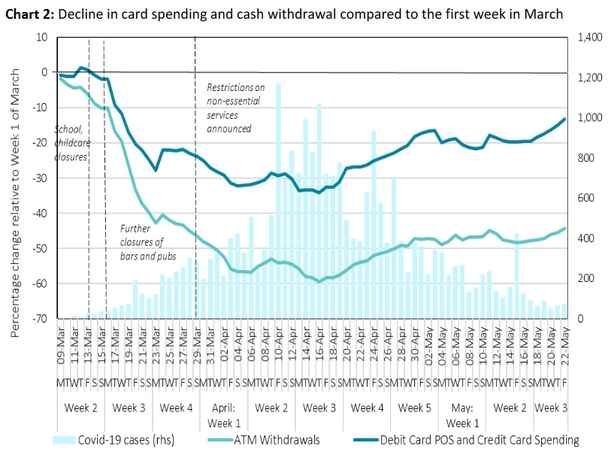 But retail card spending remains 13% lower than spending during the first week of March, it added.

Meanwhile, the value of ATM withdrawals followed a similar trend to retail card spending activity in the last number of weeks.

The Central Bank said that despite recent increases, withdrawals were 44% lower when compared to the first week of March.

The average ATM cash withdrawal amount remained elevated during April and May in comparison with historical averages, which the Central Bank said showed that people are continuing to concentrate their cash withdrawals into a small number of ATM visits.