New research has shown that women's well-being is being more adversely affected by the Covid-19 crisis than men's.

This is according to the Central Statistics Office's latest Social Impact of Covid-19 survey.

Both men and women rated their overall life satisfaction lower in April of this year compared to 2013, when the country was experiencing the effects of the 2008 financial crisis.

However there was a greater increase in the percentage of female respondents reporting "low" satisfaction with overall life in April, the CSO said.

The figures show 77.3% of women were feeling very nervous "at least a little of the time" in the past four weeks, compared to 61.3% of men.

More women also said they were "extremely concerned" about somebody else's health compared to men - 27.6% of women compared to 20.1% of men.

The CSO also said the proportion of respondents that felt downhearted or depressed "at least a little of the time" in the past four weeks has doubled since 2018.

Both women and men also said they feeling lonelier in April compared to the same time in 2018.

Today's CSO figures also reveal that women had increased their consumption of alcohol, tobacco, junk food and sweets to a greater extent than men since the Covid-19 restrictions were imposed. 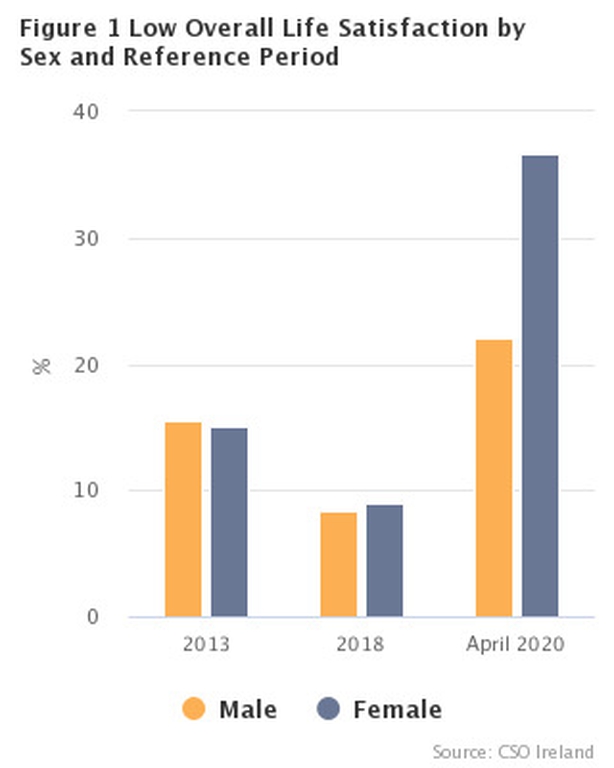 They also showed that women were reported to being more compliant with the Government's Covid-19 advice, with 88.4% reporting "high" compliance, compared to 72.5% of men.

Meanwhile, of those who are new to working from home, 48.6% of women said they would like to return to their place of work after Covid-19 restrictions are lifted, compared to 31.7% of men.

Men were more likely to want a mixture of working from home and at their place of work (60.9%) when compared with women (43.9%), the CSO added.