New figures from the Central Statistics Office show that residential property prices increased by 1% nationally in the year to March.

While the data suggested a continued stabilisation in the market in the first two and a half months of the year, a series of restrictions to slow the spread of Covid-19 were implemented in the middle of March.

The property price index is based on stamp duty returns, which have a 44-day submission deadline.

This means that only a fraction of the two most recent months' transactions are available for index compilation the following month, the CSO said in a note on the data.

Today's figures show that Dublin residential property prices rose by 0.6% in the year to March, with house prices increasing by 0.7% and apartment prices up by 1.5%.

It noted that the highest house price growth in Dublin was in Fingal at 4.7%, while Dublin City and South Dublin both saw a decline of 1.8%.

Meanwhile, residential property prices in the rest of the country increased by 1.5% in the year to March. House prices saw a rise of 1.7% but apartments prices fell by 0.9%.

The CSO said that the region outside of Dublin that saw the largest rise in house prices was the Border at 5.4%, while at the other end of the scale, the South-East saw a 1.8% decline.

The average price in Dublin at €438,693 was the highest in any region or county. Dún Laoghaire-Rathdown had the highest mean price in the Dublin region at €598,232, while South Dublin had the lowest at €363,240. 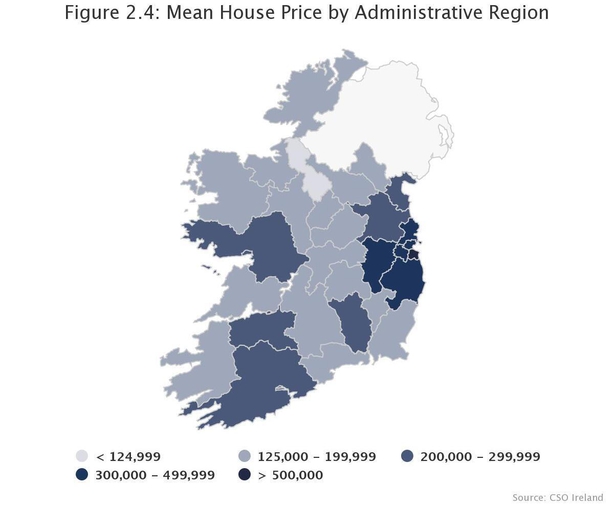 Today's CSO figures also show that in the year to March, a total of 45,743 home purchases were filed with Revenue.

These purchases were made up of 346 new homes and 864 existing homes, the CSO added.

The Institute of Professional Auctioneers & Valuers (IPAV) said there is little evidence so far of the impact of Covid-19 on the market but there is little doubt there will be for the rest of the year.

"Figures for the months ahead will be eagerly awaited, with building having come to halt," said Pat Davitt, chief executive of IPAV

"While some sites will be opening up next week it could take some time yet to get back to anywhere near normal."

"And confidence among builders and prospective buyers will impact prices in the period ahead, not to mention the extreme risk averse positions currently being adopted by lenders."

The IPAV has written to Banking and Payments Federation Ireland about some additional conditions being inserted in mortgage approvals, "so that the market can get back to stability at an earlier time than it would otherwise achieve with current practices."

"Prior to COVID-19, there was a significant shortage of homes in Ireland," he said.

"This has not changed, and once people begin to return to work, this demand is likely to re-emerge.  So, we are currently not seeing very much downward pressure on house prices. "

He added that while there has been some renegotiation on second-hand purchases where there is a chain involved, generally these have not been at the 10% level quoted by some commentators, and new homes prices have stayed level.