New figures from the Central Statistics Office show a huge fall in overseas travel to and from Ireland in March as Covid-19 restrictions started to be imposed.

This compared with monthly travel of more than 1.4 million in each direction in March last year and the figures marked a 56.7% drop in arrival figures and a 58.1% fall in departure figures.

Today's figures are contained in the CSO's new monthly release on Air and Sea Travel Statistics.

The statistics have been introduced to provide data on passenger numbers, in the absence of the CSO's monthly tourism surveys.

The CSO suspended the collection of the tourism surveys at air and sea ports in March, because of the Covid-19 situation.

Today's figures are based on information provided by the airports and sea ferry operators themselves.

They show cross-channel routes (mostly to the UK) were the most important in terms of passenger traffic, accounting for 273,100 arrivals and 258,900 departures in March.

Spain was the most important continental country for passenger traffic, accounting for 67,600 arrivals and 50,600 departures in March - declines of 50.7% and 63.4% respectively compared to March 2019. 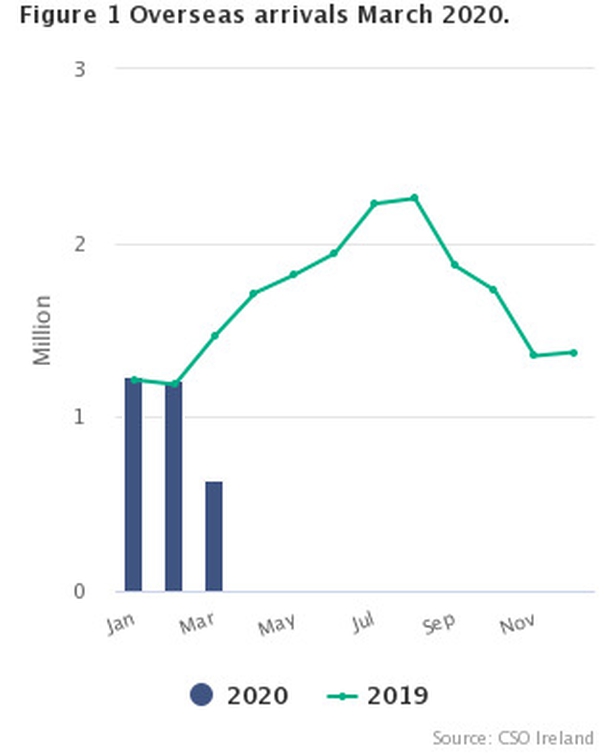 The CSO also noted that passenger traffic to and from Italy fell by 88% compared the same month last year.

There was also a major decline in passenger traffic on transatlantic routes in March.

The US, which makes up the majority of transatlantic travel, accounted for only 54,400 arrivals and 54,600 departures in March - declines of 59.1% and 56.8% respectively from the same time last year.