The country is seeking to shore up finances hit hard by low oil prices and a coronavirus-driven slowdown.

"The cost of living allowance will be suspended as of June 1, and the value added tax will be increased to 15% from 5% as of July 1," Finance Minister Mohammed al-Jadaan said.

"These measures are painful but necessary to maintain financial and economic stability over the medium to long term...and to overcome the unprecedented coronavirus crisis with the least damage possible," the minister said.

In 2018, Saudi Arabia's King Salman ordered a monthly payment of 1,000 riyals ($267) to every state employee to compensate them for the rising cost of living after the government hiked domestic gas prices and introduced value-added tax.

About 1.5 million Saudis are employed in the government sector, according to official figures released in December.

The world's largest oil exporter is suffering from slumping prices, while at the same time measures to fight the new coronavirus are likely to curb the pace and scale of economic reforms launched by Crown Price Mohammed bin Salman.

The austerity measures being introduced come after the kingdom posted a $9 billion budget deficit in the first quarter.

The finance minister said non-oil revenues were affected by the suspension and decline in economic activity, while spending had risen due to unplanned strains on the healthcare sector and the initiatives taken to support the economy. 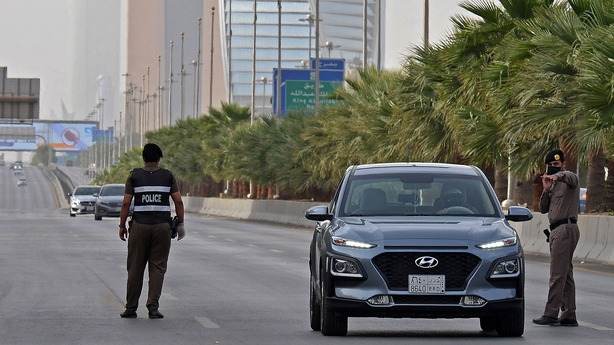 All these challenges have cut state revenues, pressured public finances to a level that is hard to deal with going forward without affecting the overall economy in the medium to long term, which requires more spending cuts and measures to support non-oil revenues stability," he added.

The central bank's foreign reserves fell in March at their fastest rate in at least 20 years and to their lowest since 2011.

Oil revenues in the first three months of the year fell 24% from a year earlier to $34 billion, pulling total revenues down 22%.

The government has canceled and put on hold some operating and capital expenditures for some government agencies, and cut allocations for a number of its Vision 2030 reform programme's initiatives and mega projects with a total value of 100 billion riyals ($26.6 billion), according to the statement.

In March, sources told Reuters that the government had asked state agencies to submit proposals for cuts of at least 20% to their budgets.

A committee has been formed to study all financial benefits paid to public sector employees and contractors, and will submit recommendations within 30 days, the statement said.

In late 2015, when oil prices collapsed from record highs, the kingdom took a number of strict austerity measures, including slashing lavish bonuses, overtime payments and other benefits that were once considered routine perks in the public sector.

In a country that has no elections and where political legitimacy rests partly on distribution of oil revenue, the ability of citizens to adapt to reforms aimed at reducing oil dependence and improving self-reliance is crucial for stability.

Earlier today, Saudi Aramco said it was slashing domestic gasoline prices for May, effective immediately, with the price of 91 grade dropping to 0.67 riyals from 1.31 riyals and 95 grade to 0.82 riyals from 1.46 per litre.

A Saudi Arabian energy ministry official said that the ministry has directed national oil company Aramco to reduce its crude oil production for June by an extra voluntary amount of 1 million barrels per day, on top of the reduction already committed by the kingdom under the OPEC+ cut deal.

"This brings the total production cut that will be carried out by the Kingdom, to around 4.8 million barrels per day, from the April production level,'' he said.

''Therefore, the kingdom's production for June, after both its targeted and voluntary cuts, will be 7.492 million barrels per day," he added.