China's exports saw a shock 3.5% rise in April despite the global impact of the coronavirus pandemic, official figures showed today, but analysts warned of weakness ahead as key markets suffer downturns.

The brewing threat of a renewed trade war with the US could also pose a problem, observers said.

A forecast of analysts by Bloomberg had predicted an 11% dive in exports and a 10% plunge in imports.

Beijing says it has been successful in largely curbing the spread of the virus in the country, and many businesses and factories are now back at work after months of closure to contain the outbreak.

Louis Kuijs of Oxford Economics said that April shipments may have been boosted by exporters making up for shortfalls in the first quarter due to supply constraints then.

In the two months from January to February - the height of the coronavirus outbreak in China - exports had plummeted 17.2%.

Analysts also said that another potential boost was China's exports of medical supplies as the rest of the world grappled with the pandemic.

The manufacturing of parts for 5G infrastructure in Asian supply chains would have continued as well, and given that these are tied to government-planned projects, they are less affected by market demand, they said.

But in spite of the bounceback this time - the first return to positive territory for exports this year - analysts do not expect the trend to last as China's key trading partners fall into recession.

Julian Evans-Pritchard of Capital Economics said Chinese shipments are unlikely immune from the sharp slowdown in global activity for long, pointing to a recent plunge in South Korean exports and noting they are a "timely proxy for global demand".

Analysts have warned of an enormous impact on world trade from the coronavirus pandemic, which has killed more than 260,500 people worldwide. 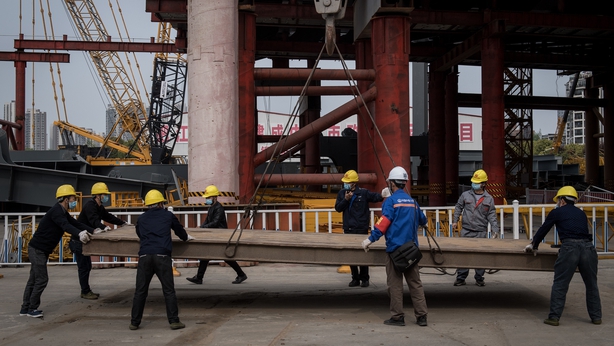 Oxford Economics expects global trade in goods and services could be cut by up to 15% in 2020, much larger than the 10% decline in 2009 during the global financial crisis.

Evans-Pritchard added that "the threat of additional US tariffs on Chinese goods shouldn't be ignored".

Recovery has been slow in the world's second-largest economy, which was already tackling weak overseas demand and a bruising trade war with the US before the outbreak ground much of the country to a halt.

The daily average of domestic trips over the Labour Day holiday was half of last year's total, while daily tourism revenues fell 68%.