The latest retail data shows that 50% of households in Ireland bought baking supplies in recent weeks, with flour sales up 52% and sugar sales rising by 43%.

The data from Kantar also shows that home grocery sales grew by 17.2% in the 12 weeks to 19 April.

But Kantar said that sales of non-grocery items like clothes and food on the go are likely to have fallen, meaning it is still a challenging time for retailers.

Today's figures show that shoppers put an average of four extra items in their trollies, which led to an increased monthly spend of around €118.

10% of Irish households shopped online for groceries in the most recent four weeks, spending an extra €20.6m.

Kantar noted that the number of retired people getting groceries delivered has doubled in the past 12 weeks, indicating the take up of delivery slots among more vulnerable groups.

While it is a boom time for supermarkets, today's data showed that in the most recent four weeks, year-on-year grocery growth slowed slightly from March levels to 22.5%.

During that period the average household visited the grocers 19 times, two times fewer than the same period last year.

Today's supermarket figures also show that Lidl was the fastest growing of all the retailers during the full 12-week period, boosting sales by 22.1% and increasing its market share to 12% while Aldi grew by 15.6% to hold an 11.8% share.

SuperValu's large store estate saw it benefit from shoppers choosing to visit outlets closer to home, and it was the only retailer not to experience reduced footfall during the past four weeks.

Kantar said that Dunnes is growing slightly behind the rest of the market as a result, but with extremely narrow margins, only 0.5 percentage points separates the three retailers at the top of the table.

SuperValu is at the top of the supermarket rankings with a market share of 22.2%, while both Tesco and Dunnes have market shares of 21.7%. 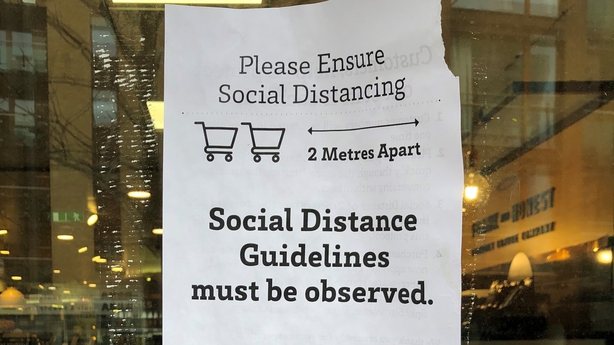 SuperValu said the result is testament to the "remarkable effort and dedication of our independent retailers and their staff as well as the implementation of protective measures such as plexiglass at tills and increased contactless payment limits for staff and customers a very early stage during the Covid-19 crisis."

It added that its robust supply chain ensured shelves remained fully stocked from the outset of the crisis.

David Berry, managing director-Ireland at Kantar, said that consumers are looking for ways to pass the time during lockdown.

"People are turning to cooking from scratch as a good way to keep their families entertained at home. Sales of ready meals are in decline but 50% of Irish households bought baking supplies in the past four weeks, with flour up 52% and sugar up 43%," he said.

Shoppers are also trying to recreate their favourite takeaway dishes have also boosted sales of ethnic ingredients by 41% and herbs and spices by 61%.

David Berry also said that while beer gardens and wine bars remain off limits, people have been turning to the grocers for their favourite tipples and boosted sales of alcohol by 70%, an additional €47m.

"Wine sales increased by 50% year on year, while beer, lager and cider sales benefited from the warmer weather and were double the levels in the same four weeks in 2019," he added.