The coronavirus will push the euro zone economy into an "unprecedented" peacetime slump, European Central Bank chief Christine Lagarde said today, vowing to use all the bank's tools to help combat the downturn.

"The euro area is facing an economic contraction of a magnitude and speed that are unprecedented in peacetime," Ms Lagarde told reporters in a videocall.

The size of the contraction will depend on the duration of the confinement measures aimed at curbing the outbreak and the policy responses to the pandemic, she said.

"As containment measures are gradually lifted, these scenarios foresee a recovery in economic activity although its speed and scale remain highly uncertain."

The ECB chief reiterated her longstanding plea for euro zone governments to play their part and support the ECB's easy-money policies with fiscal policy.

The grim tone came after Eurostat figures today showed that the locked-down euro zone economy was estimated to have shrunk by 3.8% in the first quarter of 2020.

Further highlighting how much damage the pandemic has already done to the global economy, Germany announced that its jobless total soared to 2.6 million in April from 2.3 million the month before and France confirmed that it had plunged into recession.

Christine said the second-quarter figures were likely to be worse, with output possibly shrinking 15%.

The "sharp downturn in economic activity in April suggests that the impact is likely to be even more severe in the second quarter," she told reporters via video link, speaking from an empty press room in the bank's Frankfurt headquarters.

Like the US Federal Reserve and other central banks around the world, the ECB has unveiled massive stimulus measures in recent weeks to shore up the economy and keep credit flowing.

That includes a €750 billion pandemic emergency bond purchasing programme (PEPP), set to bring the ECB's total asset purchases to around €1.1 trillion this year.

The ECB today said it was "fully prepared" to increase the emergency scheme if necessary, with Christine Lagarde saying it could run beyond 2020.

"The best tool we have in our toolbox is indeed the PEPP," Lagarde, vowing "full flexibility" to help the battered euro zone economy. 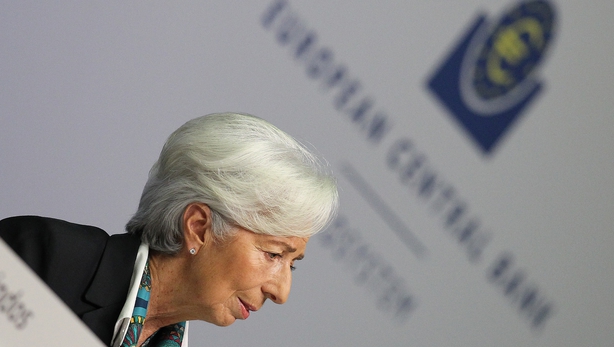 The ECB's governing council today kept interest rates at historic lows and rolled out fresh incentives to encourage banks to keep lending to households and firms throughout the crisis.

The ECB has also eased rules for collateral as part of its efforts to help banks, even accepting some below-investment grade "junk" bonds.

Asked if it would also consider buying "junk" bonds directly under its asset purchasing schemes, Lagarde said governors "had not discussed it".

"But once again, we are in such uncertain times and there is such a threat to the economic fabrics of our societies that we have to be open minded and look at all possibilities, so I'm not closing off anything in that respect," she added.

The coronavirus has now killed more than 224,000 people worldwide since it first emerged in China late last year. More than three million people have been infected, with Italy, France and Spain among the hardest hit nations.

Lagarde said the world was facing "a global health crisis" and that "the highest priority has to go to saving lives".

"We must remember that each death is a tragedy," she said, sounding a more personal note.

"We would like to express our sympathy and our condolences to all those who are suffering those deaths," she added.