Virgin Atlantic will only survive the coronavirus outbreak if it gets financial support from the British government, the airline's founder Richard Branson said today.

Virgin Atlantic last month asked the government for emergency financial help in addition to the coronavirus package made available to all British companies, but a deal has not yet been reached.

"We will do everything we can to keep the airline going - but we will need government support to achieve that in the face of the severe uncertainty surrounding travel today and not knowing how long the planes will be grounded for," Branson said in a blog post to staff.

"This would be in the form of a commercial loan - it wouldn't be free money and the airline would pay it back," he added.

Virgin Atlantic is based in the UK and is 51% owned by Branson's Virgin group and 49% owned by US airline Delta.

Branson, a billionaire, has come under fire from opposition Labour party politicians for asking for support at a time when Virgin Atlantic employees have taken a temporary wage reduction and much of the economy has ground to a halt.

Virgin Atlantic staff have taken a wage cut for eight weeks, which Branson said was a "virtually unanimous" decision by employees and not forced upon them by management.

"I've seen lots of comments about my net worth - but that is calculated on the value of Virgin businesses around the world before this crisis, not sitting as cash in a bank account ready to withdraw," he said.

"Over the years significant profits have never been taken out of the Virgin Group, instead they have been reinvested in building businesses that create value and opportunities.

"The challenge right now is that there is no money coming in and lots going out," he added. 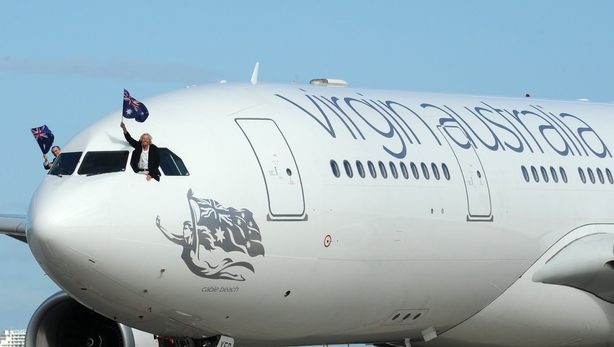 The cash-strapped carrier had appealed for an A$1.4 billion ($894m) loan to continue operations, but the federal government refused to bail out the majority foreign-owned company.

AFP understands that staff learned of the decision today, leaving about 10,000 pilots, flight attendants and ground crew in limbo.

Administrators are now expected to be appointed to try to find a buyer for the company and manage creditors.

Virgin had stood down 8,000 staff, suspended all international routes and scrapped all bar one domestic route after Australia shut its borders to limit the spread of Covid-19 and imposed tough restrictions on movement.

The Australian aviation sector - dominated by Virgin and flag carrier Qantas - had received a A$715m bailout from the Australian taxpayer and funding to resume a limited number of flights.

Queensland's government had offered Virgin an additional A$200m on the condition the airline kept its headquarters in the state capital, Brisbane.

New South Wales also tried to lure the airline to Sydney with promises of a cash injection.

However, those offers do not appear to have been enough to keep the airline from collapsing underneath more than A$5 billion in debt.

The airline is yet to make an official announcement and did not respond to a request for comment.

Australia's Transport Workers' Union urged the government to work with any administrators to save thousands of jobs.

"It is a viable and much-needed business and without it Australia will struggle to get its economy back on track once the crisis abates," said union national secretary Michael Kaine.

There are already concerns about what Virgin's troubles could mean for Australian travellers.

In March, Australian Competition and Consumer Commission (ACCC) chair Rod Sims told AFP it was vital for the country to have a rival to Qantas.