The economic cost of the coronavirus crisis through fiscal supports and deferred tax revenue will likely be over €16 billion.

At a press conference to announce the latest Exchequer figures, Finance Minister Paschal Donohoe indicated that the potential loss of taxation this year could be higher than €8 billion.

That would be on top of an estimated €8 billion cost of the measures already put in place by Government to tackle the impact of the Covid-19 pandemic.

The minister said it was not possible to put an exact figure on where the public finances will be at the end of the year, but that the numbers for tax revenue and expenditure are currently being reassessed.

The latest Exchequer figures from the Department of Finance showed that total tax revenues for the first quarter of 2020 were €800m lower than expectations.

This was mainly due to forbearance measures announced by Revenue in response to the outbreak of Covid-19.

The Government reported an overall Exchequer deficit of €2.535 billion for the three months to the end of March, a massive increase of 162% on the deficit of €966m the same time last year.

Tax receipts fell steeply in March as the coronavirus forced a shutdown of the economy, leading a collapse in VAT returns and with a surge in jobless claims yet to hit income taxes.

The country's tax take was up 1.1% in the first quarter after a strong opening two months in January and February, but 5.7% behind targets that the Department of Finance said would now be revised.

VAT returns halved year-on-year in March and were down 17% for the quarter as a whole after Revenue said they would not punish deferred payments as many businesses were forced to close.

Income tax, lagging the huge rise in unemployment, was up 13.5% year-on-year in the quarter.

The number of people claiming jobless benefits or wage subsidies tripled in March, earlier CSO data showed today, with a fifth of the labour force on job benefit packages. Today's figures show that spending by government departments was up 13.5% on a year ago and 7.6% beyond what had been expected.

On a positive note, corporation tax was €353m more than was planned for this time of year, 68% above expectations.

"At this early stage the full economic impact of the Covid-19 pandemic has not yet been manifested in taxation receipts. It is likely that revenues will continue to deteriorate significantly over the coming months," the Department of Finance said in a statement.

The minister said the figures give the first indication of how the pandemic will impact the public finances, with tax revenues set to decline steeply over the coming months.

Mr Donohoe said that on the expenditure side, the Government has put in place significant resources to help fight this virus.

"Combined with the fall in tax revenues, these measures will result in a large fiscal deficit this year," the minister said, adding that it is "entirely appropriate" that the Government cushions the effect of the crisis in this way.

"Thanks to appropriate budgetary policy over recent years, we meet this challenge from a position of strength - a budget surplus, cash reserves and significant progress in lowering our debt," he added. 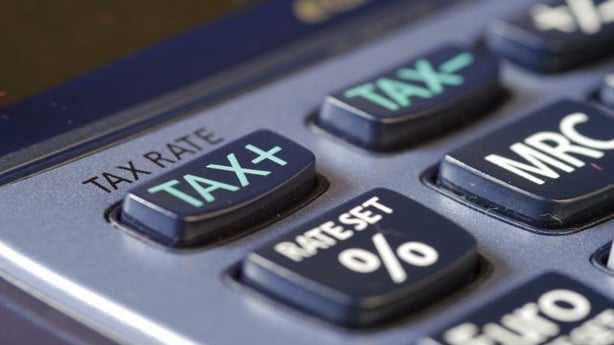 Peter Vale, Tax Partner at Grant Thornton Ireland, said that, as expected, the figures are significantly less than originally expected by the Department.

Mr Vale said that just last month figures had been running almost 14% ahead of 2019 comparatives, but that figure has now fallen to 1%.

He said the huge dip in March VAT receipts does not so much reflect a drop in spending during those months but rather the decision by many companies to defer VAT payments in March, with interest on late payment waived by Revenue in most cases.

The tax expert also predicted that for as long as the current restrictions continue, VAT receipts will suffer.

"Consumer spending will clearly be significantly lower while many businesses will likely look to defer future VAT payments," he said.

"The decrease in consumer spending represents a permanent loss of VAT revenue while the deferral of payments by businesses may also become a real cost to the Exchequer if businesses are unable to make good these payments in the future," he added.

Given the large number of employees now out of work, income tax receipts are likely to deteriorate significantly next month, and will remain weak for the foreseeable future, Peter Vale also cautioned.

He also said that due to the economic impact of Covid-19, it is inevitable that corporation tax receipts will fall "substantially".

"In the past, corporation tax receipts in Ireland acted as a buffer against any weaknesses elsewhere.  This will not be the case in 2020, with May receipts being the first major indicator of the scale of decline," he added.