Irish cheesemakers say there has been a 75% drop in sales as a result of coronavirus.

The closure of farmers' markets has been a big issue and the closure of many food services' outlets has also hit demand.

The organisation representing Irish cheesemakers has appealed to retailers to continue to stock Irish cheese and has also asked consumers to buy Irish too.

Cáis, the Association of Irish Farmhouse Cheesemakers, says that many of its members are concerned about finding a home for excess milk produced on farms.

It is particularly concerned about milk from sheep, goat and buffalo which is produced mainly by small independent producers.

The group has launched a campaign, 'Buy Irish Farmhouse Cheese Online" and wants consumers to buy cheese directly from suppliers. A list of stockists is available on its website www.irishcheese.ie

Meanwhile, co-ops across Europe have called on the European Commission to take urgent action to assist the agri-food sector to deal with the impact of coronavirus.

The Irish Co-Operative Organisation Society (ICOS) is leading the calls in Ireland, and says the EU Commission and the Commission's Directorate-General for Agriculture and Rural Development (DG AGRI) needs to act now and activate market management tools, including Private Storage Aid for butter, skimmed milk powder and cheese.

It says doing so would signal a boost of support for the market and prevent a drop off in milk price.

Alison Graham of ICOS said: "We see that dairy prices across the EU are falling. We know that as tough as things are now, they will only get worse if no action is taken."

ICOS wants Europe to provide assistance now, due to current issues but also in anticipation of further decline in demand for diary products in the coming months.

"Irish dairy co-operatives produce a significant number of products for the food service industry, which was shut down almost entirely across much of the EU and USA, over the course of a week, with no end date in sight for the restrictions," Ms Graham said.

"There is also a significant concern that there will be an economic downturn in our key markets, the USA and China - but also in Africa and the Middle East," she added.

Meat processors say meat processing is continuing despite a significant decline in demand, but they concede operations are at "reduced levels".

Processors say that "significant protective measures and protocols" are in place for staff. 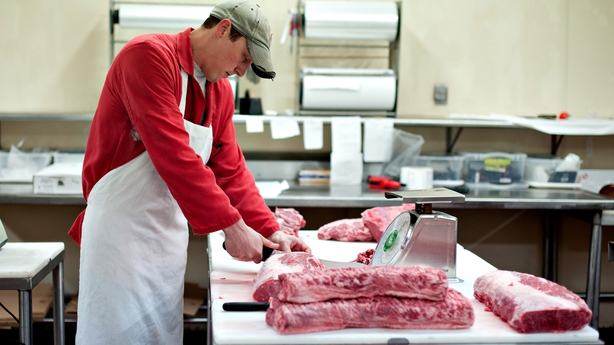 Meat Industry Ireland said today that the industry is "essential to continuity of food supply in the domestic, European and international supply chains and to facilitate orderly movement of animals from farms".

"The Covid-19 pandemic is causing serious devaluation of finished livestock prices as key market channels and certain EU markets are effectively closed and the mix of sales through retail outlets is skewed heavily towards lower value cuts," Mr Healy said.

"MII has communicated these market issues to all the stakeholders and to the Government," he said.

"While traditional market supports (intervention and APS) may not work in this case, other forms of support must be brought forward by the European Commission without delay," Mr Healy added.