The S&P500 closed at the lowest level since December 2018 as investors fear the coronavirus pandemic is proving a tougher opponent than central banks, lawmakers or the White House are capable of battling.

The S&P 500 fell about 12% despite the Federal Reserve's surprise move late on Sunday to cut interest rates to near zero, which added to the alarm about the rapid spread of the pandemic and how it has paralyzed parts of the global economy and squeezed company revenue.

"It's a market adrift with nothing to hold on to. There's nothing that can really give us a sense of when the full extent of the virus' impact will be known," said Jeffrey Kleintop, chief global investment strategist at Charles Schwab.

The magnitude of the Fed's rate move and other measures, backed by global central banks, unnerved investors as the breakneck spread of the outbreak - all but shutting down some countries - outweighed the policy response to ensure liquidity in markets.

The S&P 500 plunged 13% at the opening to trigger another automatic 15-minute halt in trading on the three main US stock indexes.

The halt was the fourth emergency pause on Wall Street in six days.

S&P 500 companies lost more than $2 trillion in value in the first few minutes of trading.

Volatility gauges known as fear indexes jumped, with the Euro STOXX 50 in Europe surging almost 28% to an all-time high and the CBOE Market Volatility index soaring more than 30% as equity markets plunged further into bear territory.

Investors worried that the Fed action, joined by central banks in Japan, Australia, New Zealand and elsewhere, may not be enough for companies facing a sharp slide in demand.

The moves were reminiscent of the sweeping steps taken more than a decade ago to staunch a meltdown of the global financial system.

"The central banks threw the kitchen sink at it yesterday evening, yet here we are (with deep falls in stock markets)," said Societe Generale strategist Kit Juckes.

"There is a great sense that central banks are going to get to grips with the issues of getting money flowing," Juckes said.

Oil, already slammed by a price war, slumped to less than $30 a barrel in early trading to lows last seen in early 2016.

There were moves in Europe to curb short-selling of stocks as bond markets tried to juggle both the risk to vulnerable countries but also a fiscal spending splurge might impact safe-haven debt.

The Fed's emergency 100 basis-point rate cut on Sunday was matched by the renewal of its quantitative easing program to increase cash in markets and more cheap US dollar funding to ease a ruinous logjam in global lending markets. 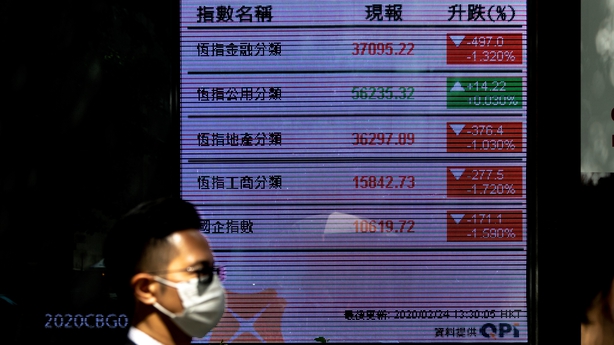 European markets continued to see heavy losses this afternoon but later made back some of the lost ground to close around 5% lower.

Airline stocks took the biggest hit with shares in IAG, the owner of Aer Lingus and British Airways, slumping 20% after saying it would cut its flying capacity by at least 75% in April and May. Ryanair shares were down around 12% at the close of business in Dublin.

Earlier, Asian stock markets and the dollar stumbled today after that US Fed cut.

The Fed's emergency 100 basis point cut last night was followed this morning by the Bank of Japan easing policy further with a pledge to ramp up purchases of exchange-traded funds and other risky assets.

There was further policy easing on Monday from the Bank of Japan in the form of a pledge to ramp up purchases of exchange-traded funds and other risky assets.

The drastic measures were aimed at cushioning the economic impact as the breakneck spread of the coronavirus all but shut down more countries, though they had only limited success in calming panicky investors.

MSCI's index of Asia-Pacific shares outside Japan tumbled 4% to lows not seen since early 2017, while the Nikkei fell 2.5% as the Bank of Japan's easing steps failed to stabilise market confidence.

Data out of China also underscored just how much economic damage the disease had already done to the world's second-largest economy, with official numbers showing the worst drops in activity on record.

"By any historical standard, the scale and scope of these actions was extraordinary," said Nathan Sheets, chief economist at PGIM Fixed Income, who helps manage $1.3 trillion in assets.

"This is dramatic action and truly does represent a bazooka," he said.

"Even so, markets were expecting extraordinary action, so it remains to be seen whether the announcement will meaningfully shift market sentiment."

He emphasised investors wanted to see a lot more US fiscal stimulus put to work and evidence the Trump administration was responding vigorously and effectively to the public health challenges posed by the crisis.

"The performance of the economy and the markets will be mainly determined by the severity and duration of the virus' outbreak."

Shanghai blue chips fell 3% despite China's central bank surprising with a fresh round of liquidity injections into the financial system. Hong Kong's Hang Seng index tumbled 4% and Australian stocks finished down 9.7% for their steepest fall since the 1987 crash.

Markets have been severely strained as bankers, companies and individual investors stampeded into cash and safe-haven assets, while selling profitable positions to raise money to cover losses in savaged equities.

Such is the dislocation the Fed cut interest rates by 100 basis points yesterday to a target range of 0% to 0.25%, and promised to expand its balance sheet by at least $700 billion in coming weeks.

Five of its peers, including the European Central Bank and Bank of England, also joined up to offer cheap US dollar funding for financial institutions facing stress in credit markets.

US President Donald Trump, who has been haranguing the Fed to ease policy, called the move "terrific" and "very good news."