The pace of growth was lower that the 6.3% predicted by the Finance Department as the country braces for the impact of the coronavirus outbreak.

GDP, which in recent years has become an incredibly volatile way of measuring Ireland's open economy, expanded by 1.8% on a quarterly basis from October to December, the CSO figures showed today.

Greater Brexit clarity convinced Ireland to nudge up its GDP growth forecasts for 2019, 2020 and 2021 in January.

But Finance Minister Paschal Donohoe said this week that the country's highly integrated economy will inevitably be impacted by the expected global slowdown related to coronavirus.

Mr Donohoe said it was too early to predict the extent to which growth would be impacted but that weaker global growth will affect the country's short-term outlook.

The economy is forecast to grow by 3.9% this year.

"Of course, we are now heading into a precarious trading environment as a result of the spread of coronavirus," he said.

"While primarily a public health and well-being issue, the economic impacts have the potential to be significant," he added.

The CSO noted that almost all sectors of the economy recorded growth last year.

Across the larger sectors, industry grew by 4% in volume terms while the information and communication sector grew by 18.5%.

In the domestically driven sectors, construction recorded growth of 5.8% during the year while distribution, transport, hotels and restaurants grew by 1.7%.

The agriculture, forestry and fishing sector saw growth of 24.3% in the year, the CSO added.

Personal Consumption Expenditure, which accounts for almost 38% of domestic demand, increased by 2.8% compared with the previous year. 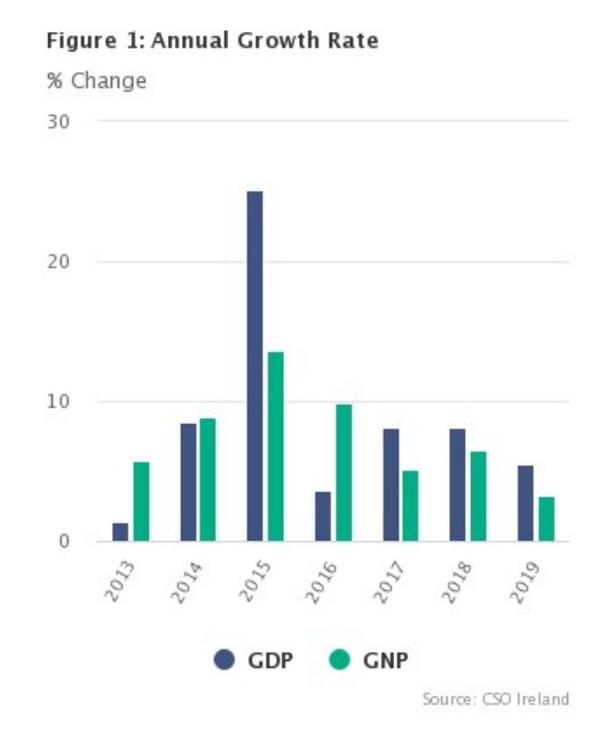 Government expenditure also increased by 5.6% over the same period.

The CSO said that exports grew 11.1% during the year while imports increased by 35.6%.

The volitile nature of Irish GDP is due to the large cluster of multinational companies operating here, and the relevance of the headline figure has, as such, diminished over the past years.

While such distortions have inflated growth to 8.2% in 2018 and 8.1% in 2017, a range of other more stable data points to very strong growth in the real economy throughout the period.

Unemployment has fallen to 4.8% from a peak of 16% in 2012, when the country was midway through an international bailout following an economic crash a decade ago.

The CSO has phased in new measures which strip out some of the distorting globalised activities. One such measure, modified domestic demand, expanded by 3% last year.