The number of people in employment rose by 3.5% in the year to December, according to the latest figures in the Labour Force Survey from the Central Statistics Office.

The Labour Force Survey is the official source of data for employment and unemployment in Ireland.

The seasonally adjusted unemployment rate fell from 5% in the third quarter of last year to 4.7% in the fourth quarter, the CSO figures also showed. 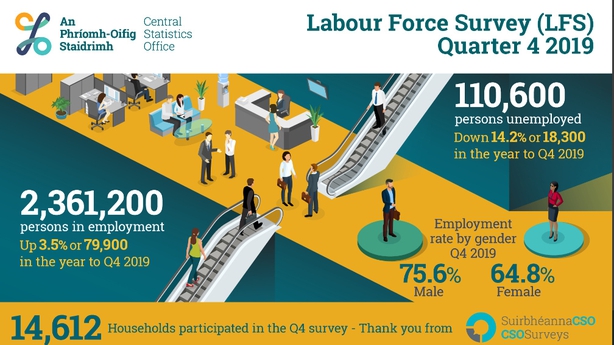 Employment growth was also recorded in all of the country's eight regions.

The jobless rate stood at 4.8% at the end of January, recent CSO figures show.

Minister for Finance and Public Expenditure and Reform Paschal Donohoe said the employment gains came despite a challenging year due to Brexit uncertainty and a slowdown in international markets.

He also said that the number of people at work reached another all-time high, with 2,350,600 people in employment in the fourth quarter last year.

"Ireland has faced and continues to face a highly uncertain macroeconomic situation with clear risks to our future economic growth, not least due to ongoing uncertainty associated with the future trading relationship with the UK," Mr Donohoe said.

"However we will face these challenges from a position of strength," he added.

Meanwhile, economists at the NERI point to a need to take a closer look at the data to discern other, less welcome trends.

Growth in the number of self-employed with no employees also took up a disproportionate share (10.3%) of employment growth compared to a share of 4.1% of overall employment.

NERI economist Paul Goldrick-Kelly points to the absence of international comparisons of relative labour market performance. "Falling unemployment should be welcomed but that rate doesn't represent the be all and end all of labour market performance. We rarely hear about our relatively low levels of aggregate employment – in terms of the percentage of the working population employed, we are distinctly average by European standards."

When semi-state bodies are included, the State workforce rises to 407,800.

The data was released in conjunction with the latest Labour Force Survey statistics.