Japan has suffered its worst quarterly GDP contraction in more than five years, with a tax hike and a deadly typhoon taking a toll on the world's third-largest economy.

Japan's gross domestic product in the three months to December shrank 1.6% from the previous quarter, even before the novel coronavirus outbreak in China hit Japan, according to official data.

The quarter was marked by a rise in consumption tax from 8% to 10%, as well as Typhoon Hagibis, which killed more than 100 people and caused widespread flooding.

Economists were braced for a contraction of around 1% but had not expected such a poor figure, with Takeshi Minami, chief economist at Norinchukin Research Institute, saying it was "quite an undershooting".

"There was a hit from natural disasters but consumer sentiment was particularly weak after the tax hike despite government measures to ease the impact," he told AFP.

The data snapped four quarters of growth and was the biggest contraction since the second quarter of 2014 when the economy shrank 1.9%.

That quarter followed a hike in the sales tax from 5% to 8% and the latest slump also appears to have been affected by a rise in consumption tax to 10% that came into effect on October 1.

Private consumption was hard hit, dropping by 2.9% - the first fall in five quarters.

Expenditure on factories and equipment decreased 3.7% despite investment getting a boost from cashless-payment systems that allow consumers to alleviate the consumption tax hike.

Economists are now carefully watching to see what impact the new virus will have on the world's third-largest economy, as it hits Japanese companies' manufacturing activities and tourism.

Japan has only a "bleak" prospect of returning to growth in the first quarter of this year, said Minami.

Private consumption would likely pick up from the October-December quarter but how much it will recover in the coming months would depend on the spread of the virus, he said. 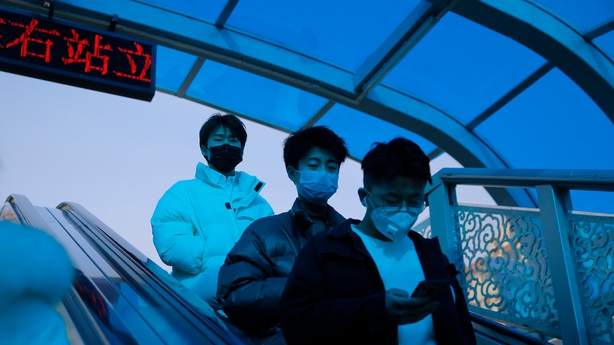 "Also, exports might struggle as delays of parts shipments from China could disrupt supply chains," he said.

He added it was "possible" that the economy will shrink for a second consecutive quarter, the technical definition of a recession.

Health minister Katsunobu Kato has urged the public to avoid crowds and "non-essential gatherings", including Japan's notoriously packed commuter trains, to prevent the virus from spreading.

However, Naoya Oshikubo, senior economist at SuMi Trust, predicted the new coronavirus outbreak would not impede recovery in the first quarter of 2020.

"External demand should continue to grow in Q1 2020 despite the outbreak of the coronavirus, which we forecast to have only a small impact on Japan's inbound tourism industry, which constitutes only 0.8 percent of real GDP," he said in a commentary ahead of the data release.

"Going forward, we should see positive growth in Q1 2020 and beyond. Domestic consumption should recover as the impact of the higher consumption tax abates," he said.

"In addition, with the Tokyo Olympics just a few months away, we will undoubtedly see a significant positive economic impact of the Games for the Japanese economy."

Japan's government is to allocate 15.3 billion yen ($139 million) to fight the economic impact of the virus, including measures to enhance airport inspections and testing capacity.