In its interim outlook, the Commssion also estimated that Ireland's real GDP will have grown by 5.7% in 2019, the fastest rate in the EU.

The strong growth was driven by strong private consumption, exports and investment, while recent surveys show a marked rebound in consumer and business sentiment after the threat of a no-deal Brexit receded, which in turn supported a more optimistic outlook.

It noted that activities by multinationals remain difficult to predict and could drive headline growth in either direction.

Meanwhile, the EU left its euro zone growth forecasts unchanged for this year and next. 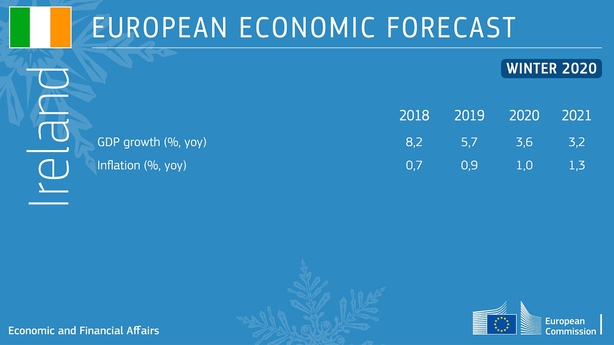 The Commission said that private consumption is set to remain strong, supported by labour market dynamics.

It noted that the unemployment rate stabilised at 4.8% at the end of last year, despite an expansion of the labour force through inward migration.

It also said that average weekly earnings rose by 4% in the third quarter of 2019, compared to the same period in 2018.

"Furthermore, the rise in the national minimum wage on 1 February 2020 should support the disposable income of poorer households," it added.

The Commission said that with the Irish economy operating at full capacity, service prices should continue to rise.