Residential property prices posted their lowest annual growth in over six years in December, increasing by 0.9% after prices in Dublin fell for a fifth month in a row.

This is according to the latest figures from the Central Statistics Office today.

House prices have stabilised over the last year having increased sharply for five years after a crash just over a decade ago.

Prices fell 0.6% month-on-month and are 17.5% below the 2007 peak nationally, the Central Statistics Office said.

Today's figures show that Dublin residential property prices decreased by 0.9% in the year to December. House prices in the city fell by 0.6% and apartments decreased by 1.8%.

The highest house price growth in Dublin was seen in Fingal at 2.9%, while Dun Laoghaire-Rathdown saw a fall of 6%. 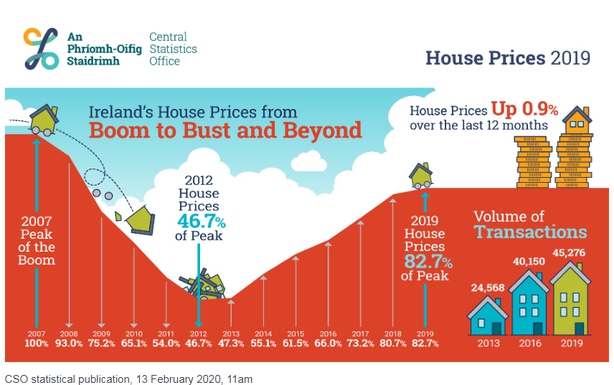 Meanwhile residential property prices in the rest of the country rose by 2.8% in the year to December, with house prices up by 2.8% and apartments by 2.6%.

The region outside of Dublin that saw the largest rise in house prices was the Border at 6.7%, while at the other end of the scale the Mid-East saw a 0.6% rise.

Unsurprisingly, the mean price of €439,418 in Dublin was the highest in any region or county.

Dún Laoghaire-Rathdown had the highest mean price in the Dublin region at €602,651, while South Dublin had the lowest at €362,755.

Outside of Dublin, the CSO said the Mid-East was the most expensive region, with a mean price of €302,816.

Wicklow was the most expensive county in the Mid-East region, with a mean price of €358,203.

The CSO said that in the year to December, 45,276 household dwelling purchases were filed with Revenue.

Revenue data also showed there were 1,482 first-time buyer purchases in December, an increase of 7.2% on the 1,382 recorded the some month in December 2018.

These purchases were made up of 522 new dwellings and 960 existing dwellings.

A lack of affordable housing and sky-high rents were central issues in a national election at the weekend.

All major parties pledged to help increase housing supply in the next government, which may take weeks to form.