The UK economy flat-lined in the final three months of 2019, when the country was in a deadlock over Brexit that was only broken by Prime Minister Boris Johnson's December election victory.

Official figures released today showed zero growth in the fourth quarter compared with the third, matching the median forecast in a Reuters poll of economists.

In annual terms, growth was 1.1%, stronger than the poll forecast of 0.8% after upward revisions to growth in some previous quarters.

However, the last time annual growth was weaker for a calendar quarter was in mid-2012.

"This is a mucky figure with the true sense of the UK economy's performance occluded by the election of December 12," said Jeremy Thomson-Cook, chief economist at payments provider Equals Group.

"More forward-looking data are more optimistic, and while outright optimism would be misplaced, upgrades to previous quarters are well received," he added.

Today's data also showed quarterly growth in household spending - which has helped drive Britain's economy for most of the period since the 2016 Brexit referendum - was the slowest in four years, rising by just 0.1%.

UK business investment dropped 1.0% over the same period, the biggest fall since late 2016.

There have been previous signs that consumers reined in their spending in late 2019, and industry figures published earlier today suggested only a modest increase in January.

However, companies have appeared more upbeat since Johnson's election victory, which lifted short-term uncertainty about whether Britain would leave the European Union at the end of January and ended the possibility of a sharp political shift to the left under the Labour Party.

Last month, the Bank of England held off from cutting interest rates as it saw signs of recovery in the economy. 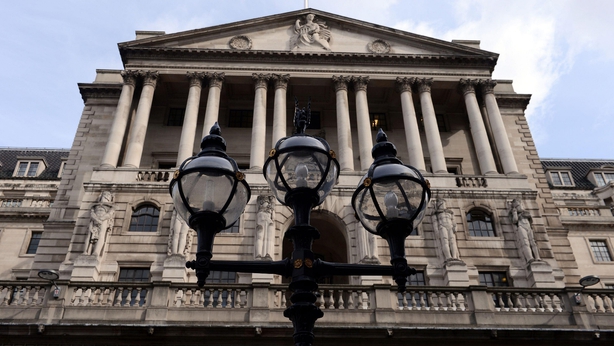 The picture of the economy in late 2019 painted by the Office for National Statistics data today was grim.

Manufacturing output fell in the three months from October to December by the most since the third quarter of 2013, down 2.5% from the same period a year earlier.

This reflected car plant shutdowns in November, when Britain had faced the prospect of a no-deal Brexit.

It is not only Brexit that has weighed on Britain's economy.

GDP in France and Italy shrank in the final three months of 2019 as the world economy felt the strain of trade tensions between the US and China.

Britain's finance minister Sajid Javid is expected to give the country's economy a boost with a spending increase in the government's first post-Brexit budget on March 11.

The ONS said today that a surge in exports of gold linked to precious metals dealing in London led to a rare trade surplus for Britain in December.

Excluding the gold distortion, the trade deficit in goods narrowed to £7.195 billion.