Growth in the Irish grocery market slowed to 1.3% in 12 weeks to January 26 - the slowest rate recorded since March 2017 - as the general election impacted consumer confidence.

But he said that while shoppers reduced their consumption of meat and dairy, households did not turn their backs on animal products completely.

"This points to an increase in flexitarian lifestyles as people look to cut back rather than go cold turkey," Mr Botham added.

Today's Kantar figures also show that Dunnes remained the country's biggest retailer with a 23.6% share of the market.

While its sales in the 12 weeks to January 26 rose by 3.3%, this was a slower increase than in recent months as falling basket sizes and lower prices impacted Dunnes' growth. 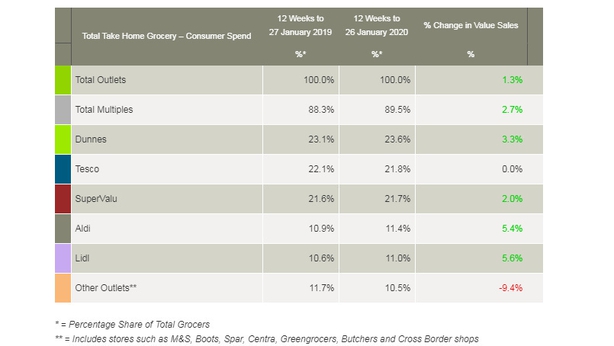 Tesco's sales were unchanged from last year as the grocer conceded 0.3 percentage points of market share to bring it to 21.8%. Despite Tesco customers visiting the retailer more often, this was not enough to boost sales.

Meanwhile, SuperValu accelerated its growth over the 12 weeks as its market share grew by 0.1 percentage points to 21.7%.

Overall, Lidl was the strongest performing retailer in the 12 week period under review, increasing its market share by 0.4 percentage points to 11%.

He said that more and more people are picking up their groceries at the retailer and 71.4% of households chose to shop at Lidl at least once over the 12 week period.