France's longest transport strike in decades over a sweeping pensions overhaul hit economic growth, causing a rare contraction in the last quarter of 2019 and a below-par figure for the full year, statistics show today.

France's GDP growth slowed to 1.2% for 2019 as a whole, statistics office INSEE said.

The economy was weighed down by a 0.1% contraction in the last three months of the year - the first quarterly fall since the second quarter in 2016.

The government, which started off last year aiming for 1.7% growth, had hoped a series of tax cuts and wage boosts for low earners would cushion the blow from the "yellow vest" protests that faded only toward last summer.

But the massive strike launched on December 5 against President Emmanuel Macron's pension reform kept many shoppers away from stores during the crucial run-up to the Christmas period.

Restaurants and a wide range of retailers complained that sales had slumped by a third or more, in particular in Paris, where metro traffic essentially ground to a halt until just a few weeks ago.

INSEE said consumer spending dropped 0.3% in December alone, though for the quarter spending grew by 0.4%.

French Business investments also plummeted, with fourth-quarter growth of just 0.3% after a 1.3% jump the previous quarter.

Economists had warned that a broad slowdown in growth worldwide had weighed on French exports last year, prompting executives to hold back on spending.

Finance Minister Bruno Le Maire called the outcome a "temporary slowdown that does not call into the question the fundamentals of French growth, which remain solid."

He insisted in a statement that "household spending and business investments are holding up."

But while France outperformed many EU countries - its GPD grew twice as fast as in Germany last year - economists warn of growing headwinds from trade tensions with the US, the fallout from Brexit and uncertainties about China's prospects.

Separately Spain said its 2019 growth came in at 2%, below the government's forecast for 2.1%.

Italy meanwhile saw anaemic growth of just 0.2% for the year, with the fourth quarter shrinking 0.3% compared with the third.

The full-year French slowdown was a marked decline from the 1.7% growth chalked up last year and the revised 2.4% expansion in 2017, when Macron took office pledging to enact far-reaching reforms to uncork France's economic potential.

He has pushed through a series of labour law changes and tax cuts for businesses, but widespread resistance to the pension overhaul has prompted the biggest show of union strength in decades.

Although the strike has tapered off, the government is still negotiating with unions on the creation of a single points-based system to replace a myriad of separate regimes which offer early retirement and other benefits, mainly to public-sector workers. 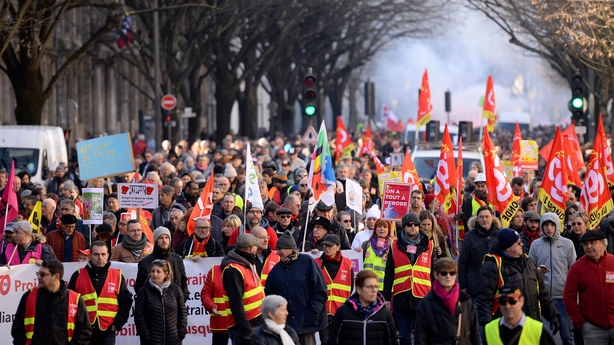 Hardline unions are insisting the government drop the plan entirely, and even the moderate CFDT union, France's largest, has warned it will not accept a proposal to move back the age for a full pension to 64 from 62.

The standoff could prompt a repeat of the protests which saw train drivers, teachers and hospital workers hit the streets, while unions blocked access to ports, refineries and fuel depots for days at a time.

That could further jeopardise France's chances for an upturn this year, when the government is banking on the latest round of tax cuts coming into effect for households -- announced to assuage the yellow vest anger.

In December, INSEE said it expected growth of 0.2% for the first quarter of 2020, and 0.3% in the second - forecasts that could be overly optimistic.