The demand comes amid concern that the flights may expose employees to the coronavirus and help spread infections.

The main Air France flight attendants' unions asked managers at a meeting yesterday to end the flights, according to officials at UNAC and SNPNC, two of the four biggest groupings.

Asked to comment on the situation, a spokesman for Air France-KLM said: "Air France is monitoring the rapidly evolving situation in real time. The health and safety of its crew remain the absolute priority."

While European rivals including Lufthansa and British Airways have already suspended China operations, Air France and Dutch stablemate KLM have maintained services on a reduced schedule reflecting a slump in demand.

The cabin staff call for a halt to Air France Beijing and Shanghai services was due to be discussed at a works council today with the support of at least one pilots' union, SPAF, which has called separately for the flights to cease.

Air France has already put in place a voluntary regime, allowing pilots and crew to opt out of China flights.

Earlier, British Airways said that all of its flights to mainland China had been cancelled for a month, in a further sign of the impact that the outbreak of a new coronavirus is having on global travel.

A spokeswoman said all flights to Beijing and Shanghai had been suspended until the end of February.

BA's suspension of flights began yesterday, but initially it had only been in place until Friday while the airline assessed the situation.

Fears over the spread of the flu-like virus, which originated in the central city of Wuhan, are growing as the death toll rose to 170 and countries warned their citizens over travel to China. 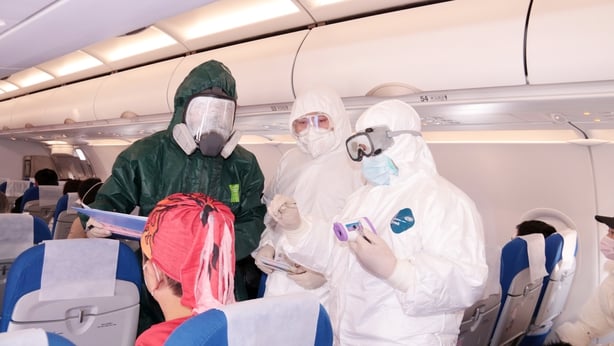 Direct BA flights to Hong Kong are not affected.

BA's move followed some flight cancellations to China by US airline United Airlines which blamed a sharp fall in demand.

Iberia, part of International Airlines Group (IAG) along with BA, said yesterday it was temporarily suspending all flights to Shanghai, its only mainland Chinese destination.

Meanwhile, Nordic airline SAS S said it will suspend all flights to and from China, as concerns grow about the global spread of the coronavirus.

Flights to and from Shanghai and Beijing are suspended from Friday January 31 until February 9, SAS said in a statement.

"After evaluating the situation in China regarding the coronavirus, SAS has decided to suspend all flights to and from Shanghai and Beijing, as from tomorrow Friday 31st January, until February 9th," the statement said.

The Hong Kong service will continue to operate, the airline said, adding that it will, "continue to monitor the situation in constant dialogue with authorities" regarding this route.