A total of 12,259 mortgages to the value of almost €2.77 billion were drawn down in the three months from October to December.

First-time buyers remained the single largest segment by volume (52%) and by value (53%),  the figures show.

The BPFI said that total drawdown activity for last year came to €9.5 billion - the highest drawdown value in over a decade.

Meanwhile, a total of 2,964 mortgages were approved in December, with first time buyers making up 51.7% of the total volume. Mover purchasers accounted for 25.7%. 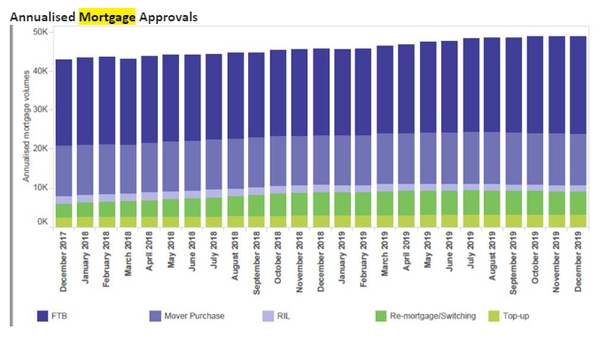 The number of mortgages approved rose by 1.9% year-on-year but fell by 29.1% compared with the previous month.

The BPFI said this reflects the seasonal trends generally seen at that time of the year,  noting that in the past four years, approval volumes have dropped by 28-30% between November and December.

Mortgages approved in December were valued at €696m. First time buyers accounted for 52% of these mortgages while mover purchasers made up 29.4%.

The value of mortgage approvals rose by 6.1% year-on-year but fell by 27.5% month-on-month - again due to seasonal factors, the BPFI said.