Budget airline EasyJet said it expects its first-half performance to improve from last year, helped by robust travel demand and a slight easing of competition after the collapse of Thomas Cook.

Reporting on the quieter winter period, EasyJet flagged an upturn in its revenue per seat.

It said its first-half headline pretax loss would narrow from the £275m the same time last year.

Chief executive Johan Lundgren said there was limited visibility on the key summer season, in which EasyJet tends to make all of its profit, but he expects the positive momentum to continue.

"Our bookings are slightly ahead for the half year and it looks the same when we go into the next half," he told reporters.

The company said its first-half revenue per seat is now expected to increase by mid to high single digits, upgrading a previous forecast for it to rise by low to mid single digits after an 8.8% jump in its first quarter.

Bernstein analyst Daniel Roeska described the growth in revenue per seat as "the star of the show".

"An encouraging trading statement with a very upbeat revenue per seat number," he said.

EasyJet said the failure of holiday company Thomas Cook last September lifted its revenue per seat by 1.5% in its first quarter - the three months to December 31 - alongside a boost from "self-help" measures.

These measures include the use of data and modelling to make predictions that help to maximise ticket prices in the seven days before a flight. 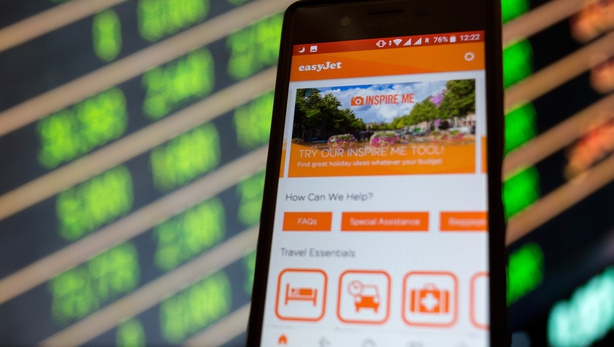 Further gains were made from strong travel demand that also enabled rival Ryanair to upgrade its profit forecast this month.

Both airlines are also benefiting from subdued market capacity growth, driven not only by Thomas Cook's failure but also airline discipline and the grounding of the Boeing 737 MAX.

The strong appetite for travel comes despite the aviation industry coming under increasing pressure to reduce emissions in the face of the growing "flight shame" movement.

EasyJet last year said it would become the world's first major airline to operate on net-zero carbon emissions across its flight network and it said the policy is reaping rewards.

"They (customers) state that they are overall more satisfied with the experience and that they are more likely to choose us," Lundgren said when asked about the net-zero commitment.