US President Donald Trump will be the star attraction at this year's Davos forum, which will also focus on the fallout of climate change and a more inclusive model of capitalism, organisers have said.

The annual gathering of global movers and shakers in the village of Davos in the Swiss Alps will draw a total of 53 heads of government and state for four days starting on January 21.

But Iranian Foreign Minister Javad Zarif, who had been due to attend, cancelled his visit amid a spike in global tensions following a US drone strike that killed Revolutionary Guards commander Qasem Soleimani.

The 50th edition of the Davos Forum will have more than 2,800 participants, including Swedish teenage eco-warrior Greta Thunberg, who will renew her call on attendees to stop subsidising fossil fuels.

"We demand that leaders play their part in putting an end to this madness," the 17-year-old, who is also due to take part in protests outside the summit, said.

Donald Trump will be accompanied by his daughter Ivanka and her husband and top presidential adviser Jared Kushner, as well as Treasury Secretary Steven Mnuchin and Commerce Secretary Wilbur Ross.

The situation in the Middle East will be a key focus for the summit.

Soleimani's killing near Baghdad international airport on January 3 has sparked fears of conflict between Iran and the US.

Iran has also been shaken by demonstrations after admitting it "unintentionally" shot down a Ukrainian passenger jet a few hours after a retaliatory missile strike against US bases in Iraq. 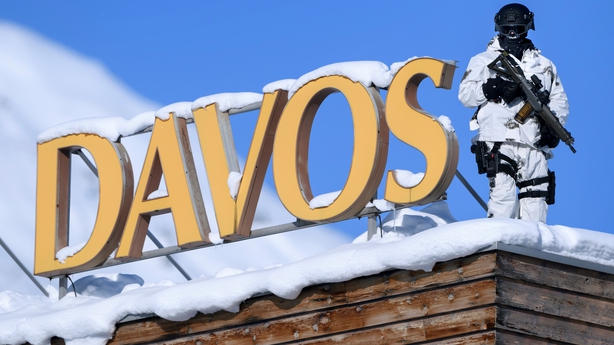 "I think we have to understand the cancellation from the Iranian Foreign Minister Javad Zarif against the backdrop of the uncertainty in the region and what is unfolding in Iran," WEF president Borge Brende said.

But Brende said other key figures will be present, including Iraqi President Barham Saleh and the president of autonomous Iraqi Kurdistan, Nechirvan Barzani.

Notable absentees include British Prime Minister Boris Johnson, who is busy finalising Britain's departure from the European Union at the end of this month after a drawn-out political crisis.

But Prince Charles, who is trying to mend frayed relations within the royal family over his son Prince Harry and his wife Meghan's shock decision to give up on high-profile royal duties, will be there.

Taoiseach Leo Varadkar and Finance Minister Paschal Donohoe have also pulled out to concentrate on preparing for the election in February.

The meeting's theme this year is "Stakeholders for a Cohesive and Sustainable World" and organisers said they would ask participants to sign up to a "Davos Manifesto" for a more inclusive model for capitalism.

"The world is in a state of emergency and the window to act is closing fast," Klaus Schwab, founder and executive chairman at the World Economic Forum, told reporters.

"We do not want to face continued political and economic disintegration, we do not want to reach the tipping point of irreversibility on climate change and we do not want that the next generations to inherit a world which becomes ever more hostile and ever less habitable," he said.

After some criticism last year over the number of private jets ferrying political and business leaders to the summit, organisers were also keen to show off the meeting's environmental credentials.

For the first time this year, solar panels and geothermal heating have been introduced in the Congress Centre and there will be a temporary railway station to encourage participants to use public transport.

Ahead of the meeting, the Swiss army has begun deploying in the area around Davos under a security plan that will involve up to 5,000 soldiers.