The peak summer holiday period should bring boatloads of cruise-ship passengers and other holiday makers to the Australian coastal town of Eden, with visitors thronging stores like Lynn Baxter's newsagent.

But this year Eden is anything but a paradise for Baxter and other business owners on the town's smoke-filled main street.

Just days after the entire town, including tourists, was evacuated in the face of fierce wildfires, most shops remained shuttered. Dead birds and burnt leaves littered the beachfront.

"It's a seasonal town," Baxter told Reuters from behind the counter of her shop, adding that income was down 85-90%.

"This money, through this time of year, gets us through winter and we don't have it now. Don't know what we're going to do," she added.

The situation in Eden is playing out in other towns across Australia where huge bushfires have burnt through more than 10.3 million hectares (25.5 million acres) of land, killed more than 20 people and left thousands homeless.

Weeks into the crisis, the economic costs are mounting, potentially wrecking the central bank's hopes for a "gentle turning point" of renewed growth in gross domestic product this quarter.

"The fires have come at a time when there was already a lot of uncertainty about Australia's economic outlook," AMP's Sydney-based head of investment strategy Shane Oliver said.

Oliver estimated a minimum 0.4% hit on gross domestic product (GDP) in the March quarter, which could mean growth stalled completely in the period and prompt a further interest rate cut as early as February.

"The impact on tourism is expected to be more lasting while the impact on consumer spending is the biggest unknown," Oliver said.

Australia's A$1.95 trillion economy is already limping after 28 years of recession-free expansion as cash-strapped consumers shun everything from clothes to cars while a three-year drought has hurt the farm sector.

The downturn prompted three rate cuts by the Reserve Bank of Australia (RBA) last year to an all-time low of 0.75%.

In signs of the early impact of the fires, data released this week showed a gauge of Australian consumer confidence slumped last week to its lowest level in more than four years. 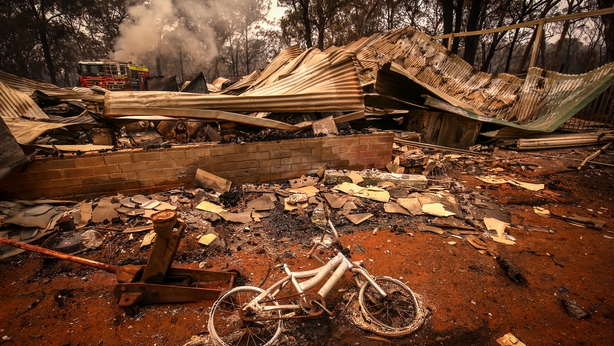 Treasurer Josh Frydenberg said he expected the full economic impact of the fires to be "very significant".

"All those businesses in those communities who have been impacted, been hit at exactly the wrong time of the year, when they're the busiest time," he told the Australian Broadcasting Corporation.

In Eden, the reopening of the town following the weekend evacuation and the fact that it escaped any major fire damage has made little difference to businesses.

At least two cruise ships have bypassed the port in the past week as smoke blankets the waterfront.

Eric Wolske moved to the town with his partner two years ago, buying an antiques shop as an investment.

"Well compared to last year this time, business obviously is down," Wolske told Reuters, adding he was banking on a cruise ship due to berth later this month.

Tourism accounts for more than 3% of Australia's annual GDP and many hotels and resorts have suffered extensive damage, while many national parks are closed.

In the cities of Sydney, Melbourne and Canberra the smoke has dented the country's clean and green image and led to the cancellation of some entertainment events.

Agricultural businesses have also been affected, with the sizeable dairy industry struggling to secure milk supplies.

Insurers have received 8,985 bushfire-related claims in New South Wales, Victoria, South Australia and Queensland since November 8. The claims are estimated to have a loss value of A$700m.