The unemployment rate remained unchanged at 4.8% in December to stay at the lowest level in almost 13 years, new figures from the Central Statistics Office show.

The jobless figure has been steady at 4.8% for three months in a row.

Today's CSO figures show that the seasonally adjusted number of people who were unemployed stood at 119,000 in December, up from 117,900 in November.

But when compared to December 2018, there was an annual decrease of 12,900 in the seasonally adjusted number of people who were without a job.

The CSO figures also show that the seasonally adjusted jobless rate for men in December was 5.4%, up from 5.3% in November, while the unemployment rate for women was 4.2%, unchanged from November.

They also reveal that the seasonally adjusted youth unemployment rate edged up to 12.6% in December from 12.5% the previous month.

The CSO unemployment data has been subject to sharp revisions in both directions in recent quarters.

An original estimate that the rate had fallen to a low of 4.5% in June was marked sharply up following the release of more detailed data.

The jobless rate in December was down from 5.5% the same time last year as the European Union's fastest growing economy approaches full employment, where just about everyone who wants a job has one.

Pawel Adrjan, economist at global job site Indeed, said that despite the pause in December, the Irish labour market ended the year in an extremely strong position, with no indication that the employment boom is set to slow in 2020.

But he said that the downside risk of Brexit remains given the strength of Ireland's trading relationships with the UK.

He said that analysis by Indeed and the Central Bank showed that many high-skilled roles in healthcare, finance and engineering suffer from a dearth of talent relative to high demand from employers. 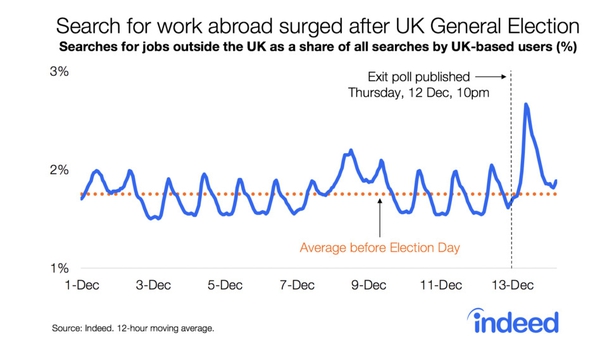 According to the economist, the silver lining for employers and recruiters is that Ireland remains attractive to foreign jobseekers.

"The UK election could also spur further migration to Ireland from the UK, with Indeed research showing that in the immediate aftermath of the result UK jobseeker searches for new roles in Ireland rose 44%," he added.