Almost six in every ten workers (59.8%) had pension coverage in the third quarter of 2019, figures from the Central Statistics Office show.

The CSO said this includes occupational pension provision from current and previous jobs, as well as personal pension coverage where payments have been deferred for a while or are currently being drawn down.

Today's figures noted that men had a higher rate of pension coverage, with 60.7% of men having a pension  compared with 58.7% of women.

The CSO figures show that pension coverage increases with age.

67.2% of workers between the ages of 35 to 44 have pension coverage, while seven in every ten people with a job have a pension in the combined age group of 45 to 69 years.

Today's figures also show that 51% of workers who are self employed have supplementary pension coverage compared with over six in every ten (61.4%) of employees. 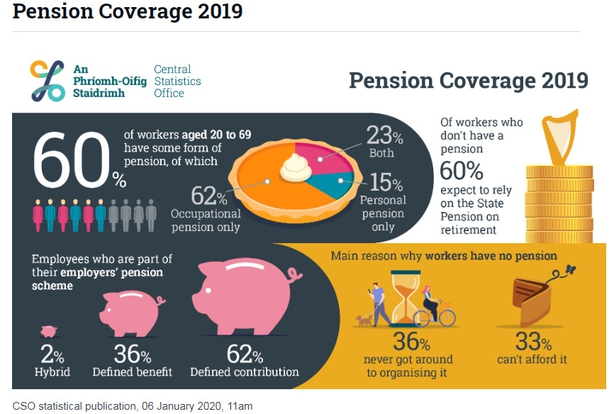 The sectors with the highest pension coverage were public administration and defence; compulsory social security (93%), followed by financial, insurance and real estate activities (85.7%) and education (83.8%).

For those workers who had no pension coverage, 33.2% said they could not afford a pension while just over 36% cited never got around to organising it.

Jerry Moriarty, the CEO of the Irish Association of Pension Funds, said if the levels of private and individual pension provision remain as low as they are now, the Government will come under pressure to do more for pensioners as the current state pension is set at a level to just keep people out of poverty.

"And, with the growing numbers of people receiving this, it will be difficult to even sustain it," Mr Moriarty cautioned.

Mr Moriarty said that many first world countries have already acted to solve the pension problem, while the Government here has committed to introduce an auto-enrolment scheme.

This is where all workers are automatically enrolled in a savings scheme with the possibility to opt-out after a certain period.

"According to the report, 36% of people don't have a pension as they simply haven't got around to organising it - the planned auto-enrolment should solve this issue. We believe the Government needs to act decisively to ensure this is delivered as planned in 2022," the IAPF CEO said.