The economy - as measured by gross domestic product - grew by 1.7% in the third quarter of this year from the second quarter.

GDP stood 5% higher than it was a year ago, new figures from the Central Statistics Office show today.

The CSO also said that quarterly GDP growth for the second quarter was revised to -0.1% from an initial estimate of 0.7% with the annual figure amended to 4.9% from 5.8%.

That meant that GDP was growing at a rate of 5.9% for the first nine months as a whole, the CSO said.

The CSO also said that the country's GNP grew by 8.9% in the three months from July to September.

But the agriculture, forestry and fisheries sector as well as the distribution, transport, hotels and restaurants sectors experienced declines.

Today's figures also reveal that personal consumption expenditure (PCE) rose by 0.9%, while exports of goods and services grew by 2.4% in the quarter.

The economy here has outperformed everywhere in the EU each year since 2014 and the European Commission expects it to do so again this year with growth of 5.6%, signalling that the economy has brushed off uncertainties arising from Brexit.

The Department of Finance has forecast that the economy could grow as little as 0.7% next year if Britain crashed out of the European Union or 3.1% in an orderly withdrawal, a course it looked set for after British Prime Minister Boris Johnson's re-election overnight.

Many economists prefer to use other indicators such as the labour market as the most accurate barometer of how Ireland's export-focussed economy is doing.

The relevance of using GDP diminished when 2015 growth was adjusted up to 26% after a massive revision to the stock of capital assets.

Such distortions, related to Ireland's large cluster of multinational companies, prompted the CSO has begun to phase in new measures which strip out some of those globalised activities.

One such data point, modified total domestic demand, rose by 3.6% on the quarter and increased by 3.5% on an annual basis. Ireland's labour market is also close to capacity with unemployment at 4.8%. 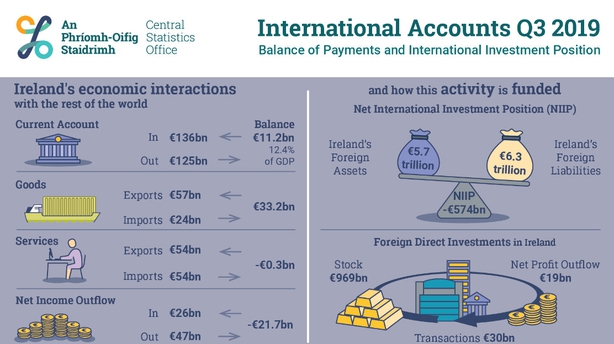 Separate figures from the CSO show that the country recorded a current account surplus of €11.2 billion in the third quarter.

This compared with a surplus of €11.4 billion the same time last year and a deficit of €26.5 billion in the second quarter of 2019.

Today's figures also show that the country had a surplus of €2.3 billion for trade in goods and services with the UK in the third quarter of 2019.

The trade surplus was offset by a deficit of €4.1 billion for income flows, which gave an overall current account deficit of €1.7 billion with the UK in the quarter, compared to a deficit of €0.7 billion in the same time last year.

Mr Donohoe said that overall growth in the economy continues to be broad-based, with positive contributions from both the domestic and multinational sectors.

Noting that exports reached a record level of €110 billion - the fourth successive quarter above €100 billion- he said this shows the resilience of the country's economic model in the face of external headwinds.

"On the domestic side, household consumption was up 3.3% year-on-year, supported by jobs growth and pay increases, while investment in new housing increased by 22%, reflecting a much needed pick-up in supply," he added.

But the Finance Minister said we must remain conscious of the risks of over-heating in the years ahead, adding that careful management of the economy and the public finances is needed now more than ever.