New Central Statistics Office figures show that consumer prices rose by 1.1% in November from 0.7% in October on the back of higher rents and mortgage interest repayments and education costs.

This was the highest rate of inflation since June of this year.

The CSO said that housing, water, electricity, gas and other fuel prices rose mainly due to higher rents and mortgage interest repayments as well as an increase in the cost of electricity, which was partially offset by a reduction in the price of home heating oil.

Meanwhile, prices in restaurants and hotels were higher on the back of more expensive alcoholic drinks and food consumed in licensed premises and restaurants, along with increases in the cost of hotel accommodation.

November also saw prices fall in the clothing and footwear sector due to sales, while prices for household goods, furniture and furnishings and household textiles were also lower. 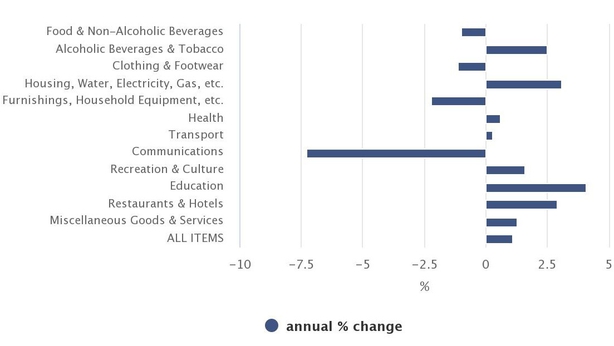 Food prices in general also fell due to lower prices across a range of products such as meat, milk, cheese, yoghurt, sugar, jam, honey, chocolate and sweets.

Commenting on today's figures, economist Alan McQuaid that that overall price pressures by historical standards are likely to remain fairly muted for a while.