The IPO was hailed by the Saudi government as a vindication of its towering $2 trillion valuation of the state oil company.

The shares closed at 35.2 riyals ($9.39) each, up from the initial public offering (IPO) price of 32 riyals and at the daily limit of price moves allowed by the Tadawul exchange.

That gives Saudi Arabian Oil Co (Aramco) a market value of about $1.88 trillion, comfortably making it the world's most valuable listed company and closing in on the $2 trillion price tag long coveted by Saudi Crown Prince Mohammed bin Salman.

Aramco raised a record $25.6 billion in its IPO last week.

This marked the culmination of a years-long effort by the Crown Prince to open up the energy giant to outside investors and raise funds to help diversify the economy away from oil.

But the kingdom cut back original plans to sell a 5% stake and include a foreign listing after lukewarm interest from international investors worried about Aramco's governance, the environment and regional instability - particularly after drone attacks on major Aramco facilities in September.

The company sold just a 1.5% stake and relied on mainly domestic and regional buyers.

Prince Abdulaziz said last week that Aramco was worth well over its IPO valuation of $1.7 trillion and predicted investors who didn't buy into the offering would be "chewing their thumbs" after missing out.

The flotation propels the Riyadh bourse into the world's top 10 by value of listed companies.

"We are hopeful that Saudi Aramco uses the Tadawul listing as a springboard to an eventual international listing," said Bassel Khatoun, managing director, frontier and MENA at Franklin Templeton Emerging Markets Equity.

But investing in Aramco is a bet on the price of oil, and growth in global demand for crude is expected to slow from 2025 as global steps to cut greenhouse gas emissions are rolled out and the use of electric vehicles increases.

Saudi Finance Minister Mohammed al-Jadaan told Reuters the bulk of the IPO proceeds would be used on domestic projects, while the global buzz around the listing would help attract foreign capital into the Saudi economy.

Aramco's debut comes as oil prices are being supported by a Saudi-orchestrated move by OPEC and oil producing allies to commit to some of the industry's deepest output cuts in a decade to try to avert oversupply.

Aramco shares began trading half an hour after the market open as the bourse allowed extra time for investors to place bids in the "opening auction" in anticipation of high demand.

Some 1.1 billion riyals worth of Aramco shares changed hands, more than a quarter of the Saudi market's traded value. 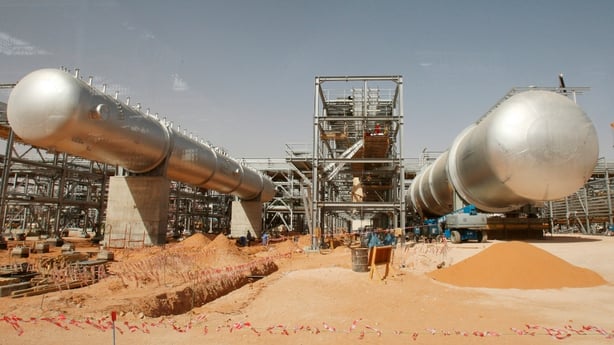 Aramco stock will become part of Tadawul index by next week and global benchmarks such as MSCI and FTSE later this month, which analysts said should fuel demand, particularly from investors who track such indexes.

Saudi retail investors who hold their Aramco shares for six months from the first day of trading can get up to 100 bonus shares, or one for every 10 held, which could limit supply of the stock, said Zachary Cefaratti, CEO of Dalma Capital.

But some analysts said investors could be tempted to take profits if the shares move beyond 37 riyals - equivalent to a $2 trillion valuation - which could happen as soon as tomorrow.

"A price of 37 riyals per share is the support level, below it people will buy and above it the shares will face resistance," said a Gulf analyst who declined to be identified due to the sensitivity of the issue.

Aramco will have the second biggest weighting on the Tadawul index of 9.7%, according to Al Rajhi Capital.

Al Rajhi Bank has the biggest weighting at 14.6% due to its larger "free float" of publicly tradeable shares.