New European Central Bank boss Christine Lagarde holds her first policy meeting on Thursday, where investors will scrutinise her every word for a sense of the direction she will take the bank in.

A relative newcomer to the world of monetary policy, Lagarde has taken the helm at a difficult time.

Her predecessor, Mario Draghi, only recently unleashed yet more stimulus to boost a weak economy and lift stubbornly low inflation.

Markets are keen to assess her take on the outlook for monetary policy and the economy, and get a sense of her communication style.

1. How strong is Christine Lagarde's commitment to the September easing package?

Christine Lagarde is expected to signal a commitment to the recent stimulus package that included an interest rate cut and the restarting of controversial asset purchases, and no major changes are anticipated at the last ECB meeting of 2019.

"The overall message will be that monetary policy will remain accommodative and there's no change on the horizon unless there's a change in the macro-economic outlook," said Marchel Alexandrovich, senior European economist at Jefferies.

Signs that the economy is stabilising give her some space. Economists do not expect significant revisions to the latest ECB economic forecasts, released on Thursday, but will pay attention to the 2022 numbers that will be forecast for the first time.

Forward-looking indicators such as Germany's Ifo business sentiment survey and IHS Markit's business activity index suggest the worst may be over. Fears over the US/China trade war and a no-deal Brexit have also eased.

2. Will Ms Lagarde change the way policy discussions and decisions are made?

Creating the broadest possible consensus and ensuring the ECB speaks with one voice should be a top priority for Chrstine Lagarde, officials told Reuters recently.

The decision to restart asset purchases exposed a deep rift at the ECB and Lagarde, who became president on November 1, may be pressed on her plans to restore unity. 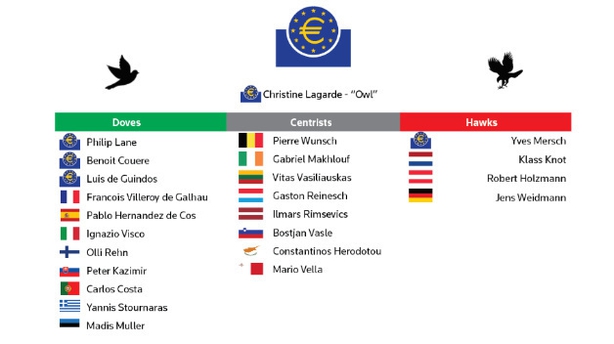 She may also be questioned about her key staff, which at present remain unchanged from Mario Draghi's team. Markets also want to see if the ECB chief economist Professor Philip Lane joins - or replaces - the vice president at the news conference alongside Lagarde.

ECB policymakers have pushed for a more consensual approach to decision making, while Lagarde has steered clear of being catagorised as a "hawk" or a "dove" - terms used to describe policymakers' monetary policy stance.

"I hope I will be an owl. I like owls. They are very wise animals," she told the German press recently.

3. Will Christine Lagarde shed any light on the upcoming strategic review?

Ms Lagarde has promised to start a review of the ECB's policy framework, a wide-ranging effort that is expected to involve a redesign of its inflation goal.

Analysts expect this to start as soon as January. A question on the time frame and scope of the review will likely come up, although details are not anticipated just yet.

When the ECB was formed two decades ago, high inflation was the biggest fear; now the opposite is the case.

At its last strategic review, in 2003, the ECB clarified its inflation target as "below, but close to, 2% over the medium term." Inflation has since long fallen short of its aim, even after massive stimulus.

Lagarde said last week that the review would assess whether the target should by symmetric - meaning that it should be used to tackle both low and high inflation and not just the latter - whether the ECB should have leeway in reaching that target, or if there should be a tolerance band around it.

"Arguably the ECB should be taking its time to do this properly – to the extent that it's going to guide policy for many, many years to come," said Chris Scicluna, head of economic research at Daiwa Capital Markets. 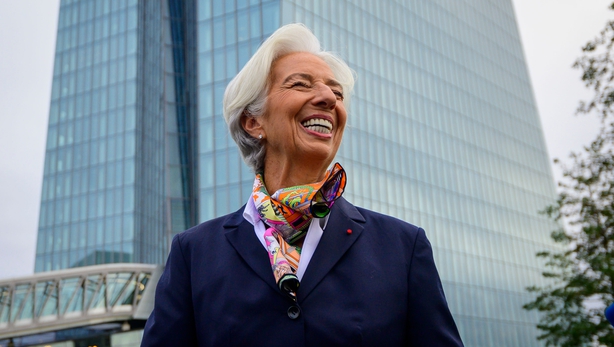 4. How does Christine Lagarde plan to encourage governments to spend?

Lagarde, a former French finance minister, is likely to be pressed on how she plans to get governments to do more, given that economists warn the ECB is nearing the limits of what it alone can achieve after years of unprecedented stimulus.

In her first policy speech as ECB chief, she argued that monetary policy will do its part to boost growth and inflation prospects but the main responsibility lies with other policymakers, which requires more and smarter investment and better use of fiscal policy.

Hopes are not high: A recent Reuters poll showed that of 43 economists surveyed, 60% said Lagarde would not succeed in spurring governments to spend more.

Others say progress is more likely privately, noting her decision to learn German as a sign she wants to win over fiscally prudent Germany.

"It's the private offline conversations, the co-ordination between the ECB and parliament that will add up to a meaningful change to fiscal policy," said Alexandrovich at Jefferies.

5. How important is climate change?

Christine Lagarde has called the fight against climate change "mission critical" and says it will be part of the ECB policy review.

Economists say the topic could become the defining feature of Lagarde's eight-year term, although matching the tough talk with action will prove challenging.

Almost half of all Europeans fear climate change more than losing a job or a terrorist attack, a recent study by the European Investment Bank showed.

"The real story should be one about a new boss who will want to leave a mark and we think that will be a green mark," said Sebastien Galy, senior macro strategist at Nordea Asset Management.

Activists have called on the ECB to use its vast purchase power to favour green assets, incentivising firms to invest in clean technology.

The ECB has argued that its mandate to keep prices stable requires market neutrality, a premise Lagarde has affirmed.

Some policymakers, such as Bundesbank chief Jens Weidmann, stress the ECB should not be at the forefront of fighting climate change.