Average weekly earnings were €740 in 2018, an increase of 3.4% on the previous year, according to new statistics released by the Central Statistics Office.

However, those on higher than average salaries can skew the numbers and the CSO pointed out that 63% of workers earn less than the average while 37% earn above the average.

There are also marked differences across industry sectors.

68.1% of those employed in the accommodation and food industry earned less than €400 per week, the CSO said.

At the other end of the scale, 23% of those employed in information and communication sector earned more than €1,600 per week. This sector, which includes IT companies, had the highest level of earnings.

Average annual earnings in the information and communication sector stood at €70,264 compared to accommodation and food sector which stood at €21,914.

Men were paid an average salary of €75,484 in the information and communication sector compared to women's earnings of €60,362.

Across the country, Co Dublin recorded the highest median wage. This is the mid-point wage that half of those in employment earn. 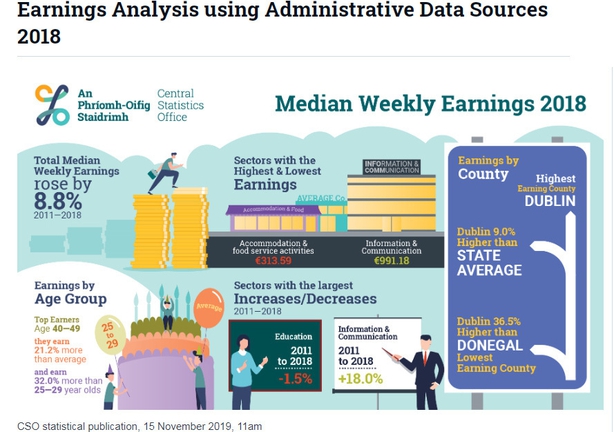