The European Commission has today raised Ireland's growth forecast for this year but cautioned that considerable uncertainty remains over Brexit and corporate tax revenue.

In its Autumn 2019 Economic Forecast, the Commission has forecast that Ireland's GDP will grow by 5.6% this year, up from a predicted rise of 4% in its summer 2019 economic forecast.

In its forecasts, the European Commission said that growth here is expected to moderate to 3.5% in 2020 and to 3.2% in 2021 on the back of increasing capacity constraints and an expected slowdown in government expenditure.

But it warned that considerable uncertainty still exists over Brexit and also pointed to changes to international tax rules which raise questions over the sustainability of Ireland's corporate tax revenues.

"GDP growth is set to moderate amid a weakening external environment, while underlying economic activity is expected to remain robust, driven by household consumption and investment in construction," the Commission said in a statement.

"Inflation is expected to remain moderate. The government balance is projected to further improve, but risks to the fiscal outlook remain," it added. 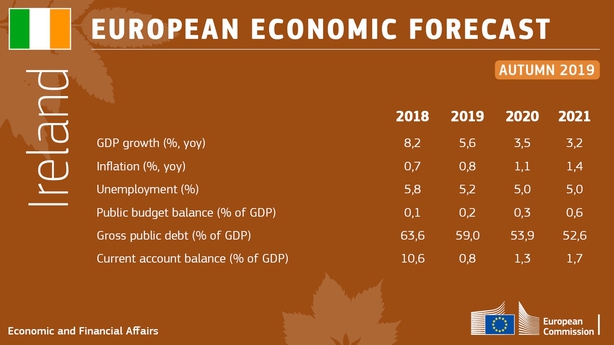 Meanwhile, the euro zone economy is likely to grow slower than earlier expected this year and next, the European Commission forecast today, because of global trade conflicts, geopolitical tensions and Brexit.

"Economic growth has continued, job creation has been robust and domestic demand strong," the Commission's Vice President for the euro Valdis Dombrovskis said.

"However, we could be facing troubled waters ahead: a period of high uncertainty related to trade conflicts, rising geopolitical tensions, persistent weakness in the manufacturing sector and Brexit," he added. 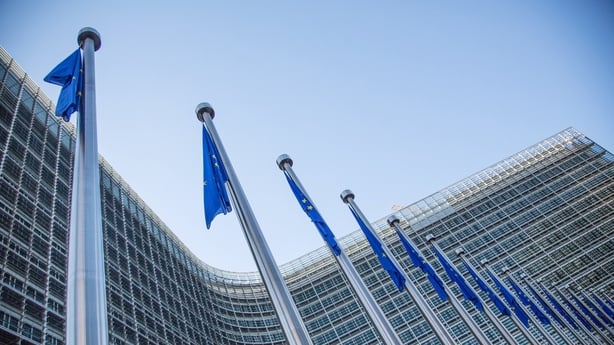 "I urge all EU countries with high levels of public debt to pursue prudent fiscal policies and put their debt levels on a downward path. On the other hand, those Member States that have fiscal space should use it now," he said.

But pressure for higher fiscal stimulus is mainly on Germany and the Netherlands, referred to as countries that have fiscal space, because both have been running large budget surpluses for years and both of which have low public debt.

The Commission sees euro zone inflation, which the European Central Bank wants to keep below, but close to 2% over the medium term, at 1.2% this year and next, rising to 1.3% in 2021 - still well below the ECB's target.

"Inflation slowed so far this year due to the fall in energy prices and because firms have largely chosen to absorb the cost of higher wages in their margins rather than pass them on to customers," the Commission said.

"Inflationary pressures are expected to remain muted over the next two years," it added.