Mothercare is set to close all its British stores with the loss of at least 2,500 jobs after its domestic operations buckled under the weight of the pressures plaguing the retail sector.

The company is a baby products retailer that operates 1,010 overseas franchise stores.

It has fallen victim to extremely difficult conditions in Britain on the back of stiff competition from online retailers and rising costs.

"The UK high street is facing a near existential problem with intensifying and compounding pressures across numerous fronts," Mothercare Chairman Clive Whiley said.

Most significant among those were high levels of rent and business rates as well as continuing shifts in consumer behaviour from high street to online, he added.

That, and the nearly 60-year-old brand's failure to attract takeover offers that would preserve the business as a going concern, led to Mothercare appointing PricewaterhouseCoopers to take charge of the units' administration process.

Mothercare is the latest in a list of brands considered a mainstay of the British shopping scene to go under. House of Fraser and department store chain Debenhams have also been placed in administration.

PwC said that Mothercare's UK store portfolio will be wound down over the coming weeks and months, adding that the entities in administration employ 2,485 retail staff and 384 head office and distribution staff.

Mothercare operates 79 retail stores in Britain, with the segment having been loss-making for a number of years, PwC said.

The retailer, which had traded from nearly 400 British stores a decade ago, has been cutting its store count in the region deliberately amid ballooning losses.

"This is a sad moment for a well-known high street name. No-one is immune from the challenging conditions faced by the UK retail sector" joint administrator and PwC partner Zelf Hussain said.

Mothercare will now focus abroad as it sets out to return the rest of the group to profitability by fiscal year 2021. 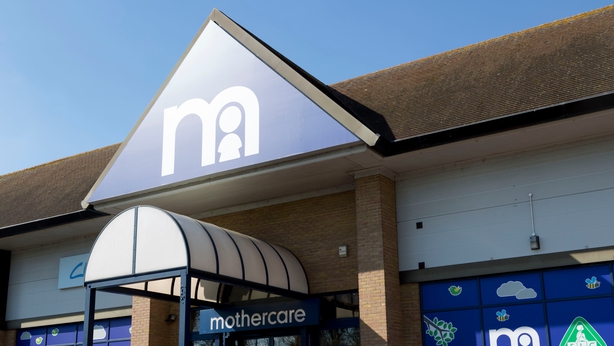 The company said it had raised £3.2m through a 10 pence a share placing and that it was in talks for up to £50m more in funding from third parties including a standby underwritten equity issue and a new term loan facility.

Mothercare added that the existing bank debt facilities amounting to £24m would be paid down by the administration process.

The restructuring also includes an agreement that has been reached with the Mothercare pension trustees to a reduction in the planned contributions over the next 18 months, the company said.

"The action announced today has been carefully thought through and without it, the existence of the wider Group would be threatened," Whiley said

Mothercare Ireland, which is a separately owned and family run business, is not affected by the developments in the UK.

Mothercare Ireland has 14 stores around the country. The business was started by David Ward in 1992 and is now run by his two sons Jonathan and Ben and daughter Laura.